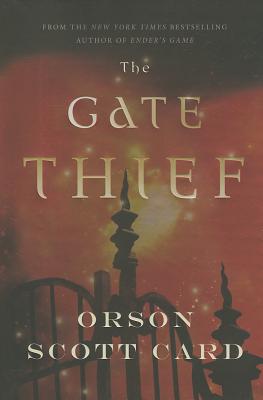 By Orson Scott Card
Call or email to see if a used copy is available.
Hard to Find - May no longer be available

In this sequel to The Lost Gate, bestselling author Orson Scott Card continues his fantastic tale of the Mages of Westil who live in exile on Earth in The Gate Thief, a novel of the Mither Mages.

And on Westil, Wad is now nearly powerless—he lost everything to Danny in their struggle. Even if he can survive the revenge of his enemies, he still must somehow make peace with the Gatemage Daniel North.

For when Danny took that power from Loki, he also took the responsibility for the Great Gates. And when he comes face-to-face with the mages who call themselves Bel and Ishtoreth, he will come to understand just why Loki closed the gates all those centuries ago.

The Mithermages series
The Lost Gate
The Gate Thief
Gatefather

Orson Scott Card is best known for his science fiction novel Ender's Game and its many sequels that expand the Ender Universe into the far future and the near past. Those books are organized into the Ender Quintet, the five books that chronicle the life of Ender Wiggin; the Shadow Series, that follows on the novel Ender's Shadow and are set on Earth; and the Formic Wars series, written with co-author Aaron Johnston, that tells of the terrible first contact between humans and the alien "Buggers." Card has been a working writer since the 1970s. Beginning with dozens of plays and musical comedies produced in the 1960s and 70s, Card's first published fiction appeared in 1977--the short story "Gert Fram" in the July issue of The Ensign, and the novelette version of "Ender's Game" in the August issue of Analog. The novel-length version of Ender's Game, published in 1984 and continuously in print since then, became the basis of the 2013 film, starring Asa Butterfield, Harrison Ford, Ben Kingsley, Hailee Steinfeld, Viola Davis, and Abigail Breslin.

Card was born in Washington state, and grew up in California, Arizona, and Utah. He served a mission for the LDS Church in Brazil in the early 1970s. Besides his writing, he runs occasional writers' workshops and directs plays. He frequently teaches writing and literature courses at Southern Virginia University.

He is the author many science fiction and fantasy novels, including the American frontier fantasy series "The Tales of Alvin Maker" (beginning with Seventh Son), and stand-alone novels like Pastwatch and Hart's Hope. He has collaborated with his daughter Emily Card on a manga series, Laddertop. He has also written contemporary thrillers like Empire and historical novels like the monumental Saints and the religious novels Sarah and Rachel and Leah. Card's work also includes the Mithermages books (Lost Gate, Gate Thief), contemporary magical fantasy for readers both young and old.

Card lives in Greensboro, North Carolina, with his wife, Kristine Allen Card. He and Kristine are the parents of five children and several grandchildren.

“Mr. Card is giving a kind of tour of fantasy possibilities while integrating them into his intricately imagined system of magic. One of the system's charms is that it explains such a lot: what ghosts are (the fading "outselves" that mages can project), what fairies are (playful creations that mages make from trash, plants and petals), and why all Indo-European gods have such strong family resemblances. The hints of real history behind the families are especially enticing: I look forward to learning more.” —The Wall Street Journal on The Lost Gate