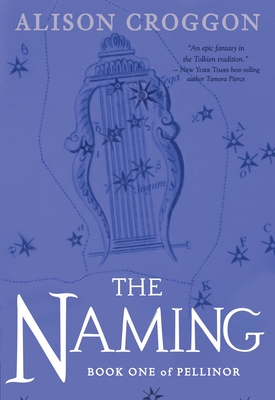 A sumptuous, riveting tapestry of a book. The naming offers evocative descriptions of a world both beautiful and perilous, as well as a bold, enduring heroine. With all this and a suspenseful, slow-burning romance, Pellinor is one of the most rich and vivid fantasy worlds created since Tolkien's Middle-earth.

A sixteen-year-old slave, Maerad, is an orphan who finds herself not only gifted with music, but with unusual and amazing magical powers. Taking from the worlds of fantasy, magic, and even history, this first in a series is a new voice in young adult fiction worth reading. — Jeanette

"Epic fantasy in the Tolkien tradition, with a strong girl hero who is entirely believable in her struggles. . . . I couldn't put it down!" — Tamora Pierce, author of the Protector of the Small and the Circle Opens quartets

Maerad is a slave in a desperate and unforgiving settlement, taken there as a child when her home was destroyed. She doesn’t yet know she is a member of the noble School of Pellinor and has inherited a powerful gift, one that enables her to see the world as few others can. It is only when she is discovered by Cadvan, one of the great Bards of Lirigon, that her true identity and extraordinary destiny unfold.

Alison Croggon is an award-winning Australian poet whose work has been published extensively in anthologies and magazines around the world. Her plays and opera libretti have been produced in Australia, and she is also an editor and critic. She began to write the books of Pellinor when her oldest son, Joshua, was reading fantasy. "I had forgotten how much I loved this stuff when I was a kid, and Josh's reading reminded me," she says. "My first real ambition as a child was to write a fantasy novel. One day I sat down and started writing a story. I had no idea what would happen, but one character appeared, and then another, and before long I had to finish the story to find out what happened." That story was THE NAMING. She says she was surprised by how the book seemed to unfold, already formed, before her. "Perhaps it's been waiting to be written for thirty years." Alison Croggon lives in Melbourne, Australia, with her playwright husband and their three children.

This Australian import is high fantasy of high caliber.
—Bulletin of the Center for Children's Books, The

Many fantasy fans will look forward to following Maerad's adventures in the next volumes of this fantasy quest.
—Booklist

Unbelievably fine, this book represents fantasy storytelling at its best. This exemplary novel is sure to appeal to all fantasy fans.
—Voice of Youth Advocates