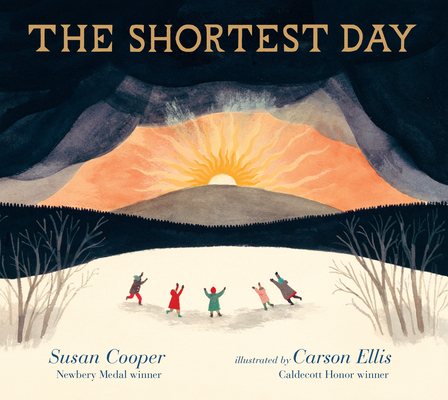 A beautiful ode to the rituals and celebrations passed on through the ages as communities would gather to stave off the dark and to usher in a new year filled with light on the night of the solstice. — Jessica Wood

As the sun set on the shortest day of the year, early people would gather to prepare for the long night ahead. They built fires and lit candles. They played music, bringing their own light to the darkness, while wondering if the sun would ever rise again. Written for a theatrical production that has become a ritual in itself, Susan Cooper’s poem "The Shortest Day" captures the magic behind the returning of the light, the yearning for traditions that connect us with generations that have gone before — and the hope for peace that we carry into the future. Richly illustrated by Carson Ellis with a universality that spans the centuries, this beautiful book evokes the joy and community found in the ongoing mystery of life when we celebrate light, thankfulness, and festivity at a time of rebirth. Welcome Yule!

Susan Cooper wrote “The Shortest Day” for John Langstaff’s Christmas Revels, where it is performed annually across the country. She is the author of the classic fantasy sequence The Dark Is Rising, which includes the Newbery Medal winner The Grey King, as well as many other books for children and adults. She lives on a salt-marsh island in Marshfield, Massachusetts.

Carson Ellis is the creator of the Caldecott Honor Book Du Iz Tak? and the New York Times bestseller Home. She is also the illustrator of The Composer Is Dead by Lemony Snicket and Dillweed’s Revenge: A Deadly Dose of Magic by Florence Parry Heide, and she collaborated with her husband, Colin Meloy, on the best-selling Wildwood series. Carson Ellis lives outside Portland, Oregon.

Based on Cooper’s poem by the same name, originally written for a theatrical performance, this cyclical volume offers an alluringly haunting alternative to more familiar seasonal fare—one that is sure to serve as “lights of hope” on a dark season’s stage.
—Publishers Weekly (starred review)

"So the shortest day came," writes Cooper, and Ellis' beautiful gouache paintings depict a world that is pushing against the dark with candles and dance and song. Despite the urgency of the people to push away darkness for light, the tone of the tale is one of hope, anticipation, love, joy and spiritual happiness, culminating with Yule. People depicted morph from early hunter-gatherers to people in northern European medieval garb to a multiracial gathering. They gather in a modern Western home with mantelpiece decorated with menorah and holly, singing carols by the Christmas tree. As precious as sunshine.
—Kirkus Reviews (starred review)

This lovely celebration of winter solstice blends imagery from the long-ago revelries of northern Europeans with modern-day observations and global traditions...A treat to share aloud, this book makes a unique choice for seasonal sharing, opens discussion about rebirth rituals and holidays that incorporate light, and celebrates hope even in darkest times.
—School Library Journal (starred review)

Now transformed into a picture book, The Shortest Day is a joyful and timeless celebration of the winter solstice that will surely become a classic...The multitalented, Caldecott Honor-winning Carson Ellis (Du Iz Tak?) is the perfect illustrator for this project, using muted colors to accentuate the changing interplay between the sun and surrounding darkness.
—BookPage (starred review)

Here, Cooper's words are perfectly paired with Caldecott Honor artist Carson Ellis's ethereal gouache illustrations. Ellis's paintings masterfully juxtapose the physical world of Cooper's revelers with the spirits and beliefs they are celebrating. This gorgeous volume will remind readers they are a part of the vast history of the world. "Welcome Yule!"
—Shelf Awareness for Readers (starred review)

The Shortest Day began as a work for the theater...Here, Cooper's words are perfectly paired with Caldecott Honor artist Carson Ellis's ethereal gouache illustrations. Ellis's paintings masterfully juxtapose the physical world of Cooper's revelers with the spirits and beliefs they are celebrating. This gorgeous volume will remind readers they are a part of the vast history of the world. "Welcome Yule!"
—Shelf Awareness for Readers (starred review)