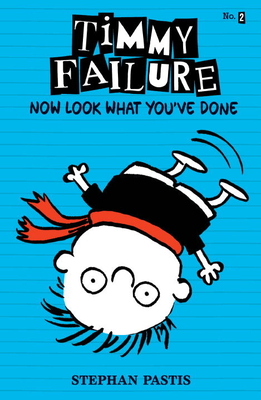 This is book number 2 in the Timmy Failure series.

The creator of "Pearls Before Swine" hits another home run with this young readers series. Timmy Failure is possibly the worst Private Eye in the world. But gosh darn it, he's got enthusiasm! If you've got a "Wimpy Kid" fan in the house, this series is even better! — Chris Linendoll

Timmy Failure is back! He's still solving crimes- though now with a broken leg and occasional assistance (or perhaps distraction) of his Great-Aunt Colander. This time, Timmy must prove his true Greatness. Of course, his arch-nemesis (and pretty much everyone else) seems to be out to stop him in this hilarious sequel. Timmy Failure is destined for Greatness- at least in the world of middle grade books. — Marika McCoola

The clueless, comically self-confident kid detective returns in a sequel to the New York Times bestseller Timmy Failure: Mistakes Were Made.

"When you lose hope, find it." —Timmy Failure

He doesn’t like to pull rank. To reveal that he’s this guy: Timmy Failure, founder, president, and CEO of the greatest detective agency in town, perhaps the nation. But he is.

And he’s about to crack the biggest case of his generation: a school competition to find a stolen globe. It’s his ticket to bringing home a $500 prize, which is guaranteed to set him up for life. But someone is clearly trying to game the system. Hoodwink. Con. Defraud. So it’s up to Timmy Failure, with the dubious help of Total, his lazy polar-bear partner, and his unlikely new ally, eccentric Great-Aunt Colander, to find a way to avenge these shenanigans. Defeat this injustice.
If he can only get his entry form in on time.

Stephan Pastis is the author-illustrator of Timmy Failure: Mistakes Were Made, a New York Times bestseller. He is also the creator of the devoutly followed comic strip Pearls Before Swine, which appears in more than six hundred newspapers. His compilation Larry in Wonderland debuted at #1 on the New York Times bestseller list for paperback graphic novels. Stephan Pastis lives in Northern California.

Pastis has a knack for comic timing, and the interplay between cartoon, text, and the absurdities of the story should continue to attract readers who wish they could shake their fists at the world with such inept panache.
—Booklist

If Inspector Clouseau were in grade school, he’d be Timmy Failure. ... [H]is many fans will speed through the pages, and they’ll love Pastis’ illustrations, which feature an adorable polar bear shaped like a bowling pin. They may even adopt Timmy’s motto: “When you lose hope, find it.” A loonily intellectual alternative to that wimpy kid.
—Kirkus Reviews

Timmy is a wonderfully frustrating narrator. ... [A]s Timmy’s grip on reality begins to weaken and his actions begin to alienate those around him, readers will nevertheless sympathize with his unraveling. Fans of the “Diary of a Wimpy Kid” series or the “Big Nate” books will enjoy the sharp, ironic humor as well as the black-and-white comic illustrations. ... [P]lenty of the puns, plays-on-words, and clever comedic timing will result in laugh-out-loud moments.
—School Library Journal

Great-aunt Colander is the gem of the series thus far. She truly "gets" and seeks out Timmy, and she's the resourceful and clear-eyed antidote to the discombobulated detective. ... This heartwarming companion will make Timmy's fans even more eager for the third adventure, planned for this coming November.
—Shelf Awareness