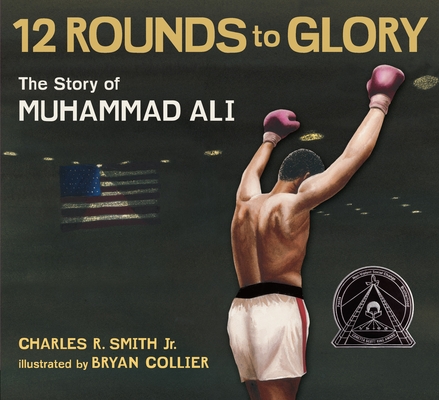 The rap inspired verse of Twelve Rounds to Glory: The Story of Muhammad Ali, (ages 10 & up) by Charles R. Smith Jr., illustrated by Bryan Collier, weaves and bobs and jabs with relentless energy while the bold collage artwork matches every move. Charting the career and life of "The Greatest" from the moment in 1960 when he won Olympic gold to raising the Olympic torch in 1996 with shaking hands. This is a dynamic chronicle of a remarkable life. — Jessica Wood

"An in-depth look at Ali’s life through twelve rhyming poems. . . . Collier’s bold pictures . . . are among the best of his illustrious career." — Booklist (starred review)

From the moment a fired-up teenager won 1960 Olympic gold to the day when a retired legend, hands shaking from Parkinson’s, returned to raise the Olympic torch, the boxer known as "The Greatest" waged many a fight. Some were in the ring, against opponents like Sonny Liston and Joe Frazier; others were against societal prejudice and a war he refused to support because of his Islamic faith. The rap-inspired verse weaves and bobs and jabs, while bold collage artwork matches every move, capturing the "Louisville loudmouth with the great gift of rhyme" who shed the name Cassius Clay to take on the world as Muhammad Ali. Back matter includes a time line.

Collier's bold pictures...are among the best of his illustrious career, capturing both nuance and excitement.
—Booklist (starred review)