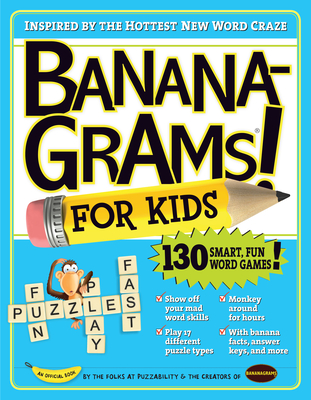 Kids love Bananagrams—so what better treat for kids who love puzzles and wordplay than a smart, just-for-them collection: Bananagrams! for Kids.

Puzzability, the premier puzzle-writing company who wrote The Brainiest Insaniest Ultimate Puzzle Book! and whose mind-benders have appeared in Disney Adventures, Nickelodeon magazine, The New Yorker, and The New York Times, creates original and unexpected word puzzles that capture the quick-on-your-feet spirit of Bananagrams. There are over a dozen of banana-themed varieties, including Bunched Up (a mini-crossword), Monkey in the Middle (building a larger word out of two smaller words, with clues), Banana Pancakes (a stack of anagrams using letters in common), and Going Bananas (complete a sentence with two different words made from the same letters).

What's invisible to kids is that behind the silly names and clever formats, these games have a strong educational side—they strengthen vocabulary, reward agile thinking, and reinforce the idea that using your brain is fun. The puzzles are rated in difficulty from one to four bananas, and an answer key is included.

Puzzability, based in New York, includes Mike Shenk, who has written puzzles for Games magazine and its offshoots, and provided daily crosswords for a major newspaper syndicate. He is currently the crossword editor of The Wall Street Journal; Amy Goldstein, a trivia buff and wordsmith who has served as associate editor and managing editor for Games magazine and its sister publications; and Robert Leighton, an illustrator, writer, New Yorker cartoonist, and creator of unique visual puzzles.

Amy Goldstein is an expert puzzle maker. Along with Robert Leighton and Mike Shenk, she founded the company Puzzability, which creates unique and challenging puzzles for kids and adults.

Robert Leighton, a New Yorker cartoonist, has created puzzles for The New York Times, Chicago Tribune, The New Yorker, ABC, and more. He lives in New York. Along with Mike Shenk and Amy Goldstein he’s the founder of Puzzability, which creates unique and challenging puzzles for kids and adults.

Mike Shenk is an expert puzzle maker. Along with Robert Leighton and Amy Goldstein, he founded the company Puzzability, which creates unique and challenging puzzles for kids and adults.