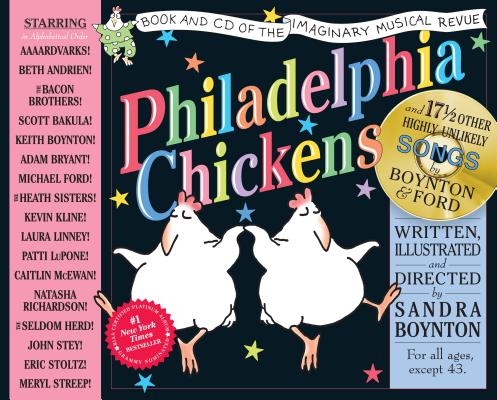 By Sandra Boynton, Michael Ford
Call or email to see if a used copy is available.
Out of Print

You have to hear it to believe it. And even then, it may take a while.
Grammy nominee. #1 New York Times bestseller. And, with 1 million copies in print, a Recording Industry Association of America Platinum album. What an event! What a show! It’s Philadelphia Chickens—the catchy and quirky, tuneful and toe-tapping, exuberant, unexpected, and totally endearing family-musical-in-a-book.

Here is a full-color songbook of 17 1/2 illustrated story-poems, and a full-length, fully orchestrated CD of original songs performed by such luminaries as Patti LuPone, Kevin Kline, Meryl Streep, The Bacon Brothers, and Laura Linney, who pleads "Please, Can I Keep It?—it followed me home. / What exactly it is/ I don't know." Also joining in are Eric Stoltz, Scott Bakula, and two Boyntons, including daughter Caitlin McEwan, who performs a piece that every little listener will relate to—a love song to the chocolate chip cookies that are just out of reach. With the collaboration of composer Michael Ford, Philadelphia Chickens is that rarest of kids' musical discs—one whose inimitable lyrics and music make it as irresistible to parents as it is to their children.

Sandra Boynton is a popular American cartoonist, children's author, songwriter, producer, and director. Since 1974, Boynton has written and illustrated over sixty children's books and seven general audience books, including five New York Times bestsellers. More than 70 million of her books have been sold, "mostly to friends and family," she says. She has also written (with Michael Ford) and produced six albums of renegade children's music. Three of her albums have been certified Gold (over 500,000 copies sold), and Philadelphia Chickens, nominated for a Grammy, has gone Platinum (over 1 million copies sold). Boynton has also directed twelve music videos of her songs, including the award-winning "One Shoe Blues" starring B.B. King, "Alligator Stroll" starring Josh Turner, and "Tyrannosaurus Funk" (animation) sung by Samuel L. Jackson. She lives in rural New England, and her studio is in a barn with perhaps the only hippopotamus weathervane in America.

Michael Ford, Sandra Boynton’s esteemed collaborator on Philadelphia Chickens and Rhinoceros Tap, is a classically trained composer and pianist, with a long detour in Progressive Rock performance. He and his family live down the road a spell from Sandy.