The Unseen Lusitania: The Ship in Rare Illustrations (Hardcover) 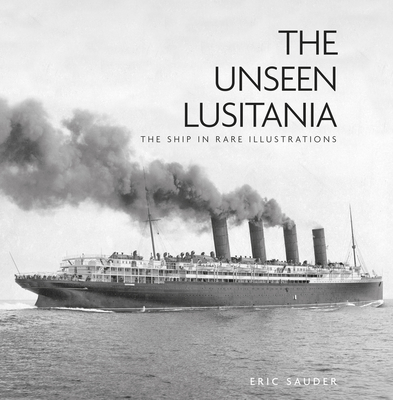 A definitive look at the great Cunarder, lost to a German torpedo on a sunny May afternoon in 1915. The author's informative text is accompanied by a remarkable collection of rare photographs of the Lusitania, once the fastest ship in the world. Vintage photos of the liner's lavish interiors, her passengers on that fateful last voyage, and the debris on the floor of the Atlantic are all included. This is an ideal source for expanding knowledge acquired by reading Erik Larson's Dead Wake. — Alden Graves

The ill-fated Lusitania revealed as never before, complete never-seen artifacts from the 1982 wreck salvage and a complete salvage inventory

Lost to a German torpedo on May 7, 1915, Cunard’s RMS Lusitania captured the world’s imagination when she entered service in 1907. Not only was she was the largest, fastest ship in the world, she was revolutionary in design. Also a record breaker, Lusitania is now sadly remembered for her tragic loss, when she was hit by a U-boat torpedo on May 7, 1915, sinking in 18 minutes with the loss of 1,198 souls. Through never-before-seen material, expert Eric Sauder brings RMS Lusitania to life once again. With vivid, unseen photographs and postcards from his extensive private collection, this absorbing read will transport the reader back 100 years to a time when opulent Ships of State were the only way to cross the Atlantic.

Eric Sauder has been researching ocean liners for nearly 40 years. He was historian for Dr. Robert Ballard's exploration of the remains of Lusitania and Britannic and has also dived to Titanic, Republic, and Andrea Doria. He has been involved in numerous documentaries for the A&E Channel, The History Channel, The Discovery Channel, and The Learning Channel, as well as coauthoring the book RMS Lusitania. He has worked on a number of projects with the National Geographic Society.