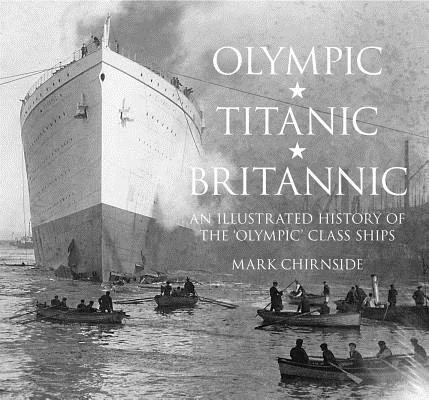 By Mark Chirnside
$39.95
Hard to Find - May no longer be available

This is the perfect book for everyone who thought that there was only one Titanic. There were, in actuality, three almost identical White Star superliners. This beautifully illustrated volume is filled with rare photographs and little known facts about the three sisters, only one of which survived to old age. — Alden Graves

A pictorial celebration of the world-famous sister ships: the Olympic-class liners
A maritime expert tells the story of the sister ships using previously unseen pictures, passenger diaries, and deck plans, illustrating Olympic's successful career; the premature ends of her two unfortunate sisters; and the experiences of those onboard. Designed for passenger comfort, they were intended to provide luxurious surroundings and safe, reliable service rather than record-breaking speed. Ironically, fate decreed that only Olympic would ever complete a single commercial voyage and she went on to serve for a quarter of a century in peace and war. Titanic's name would become infamous after she sank on her maiden voyage. The third sister, Britannic, saw a brief and commendable career as a hospital ship during World War I, sinking in the Aegean Sea in 1916.