The Book of Lost Things (Hardcover) 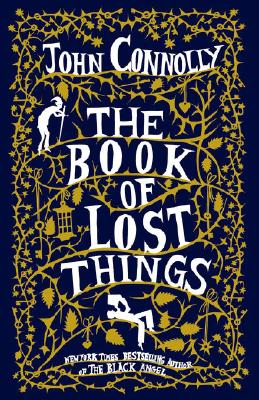 A dark ,grim fairy tale of sorts.
After the loss of his mother, young David is kept company only by his books. Soon, a plane crashes into his back yard, and he is drawn in the dark world that has opened. He must find his way back to the real world, but it might not be so easy.
A coming-of-age tale wrapped in twisted fantasy.

New York Times bestselling author John Connolly's unique imagination takes readers through the end of innocence into adulthood and beyond in this dark and triumphantly creative novel of grief and loss, loyalty and love, and the redemptive power of stories.

High in his attic bedroom, twelve-year-old David mourns the death of his mother. He is angry and alone, with only the books on his shelf for company. But those books have begun to whisper to him in the darkness, and as he takes refuge in his imagination, he finds that reality and fantasy have begun to meld. While his family falls apart around him, David is violently propelled into a land that is a strange reflection of his own world, populated by heroes and monsters, and ruled over by a faded king who keeps his secrets in a mysterious book... The Book of Lost Things.

An imaginative tribute to the journey we must all make through the loss of innocence into adulthood, John Connolly's latest novel is a book for every adult who can recall the moment when childhood began to fade, and for every adult about to face that moment. The Book of Lost Things is a story of hope for all who have lost, and for all who have yet to lose. It is an exhilarating tale that reminds us of the enduring power of stories in our lives.