The Stolen Ones (A Stevens and Windermere Novel #4) (Paperback) 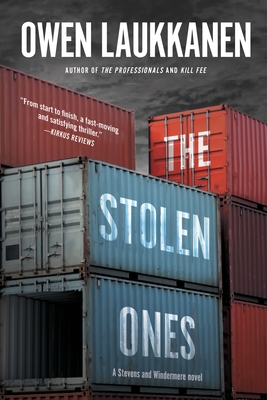 This is book number 4 in the A Stevens and Windermere Novel series.

The blistering new novel from the author of the multi-award-nominated The Professionals—“Laukkanen is one of the best young thriller writers working today” (Richmond Times-Dispatch).

Cass County, Minnesota: A sheriff’s deputy steps out of a diner on a rainy summer evening, and a few minutes later, he’s lying dead in the mud. When BCA agent Kirk Stevens arrives on the scene, he discovers local authorities have taken into custody a single suspect: A hysterical young woman found sitting by the body, holding the deputy’s own gun. She has no ID, speaks no English. A mystery woman.

The mystery only deepens from there, as Stevens and Carla Windermere, his partner in the new joint BCA–FBI violent crime task force, find themselves on the trail of a massive international kidnapping and prostitution operation. Before the two agents are done, they will have traveled over half the country, from Montana to New York, and come face-to-face not only with the most vicious man either of them has ever encountered—but two of the most courageous women.

They are sisters, stolen ones. But just because you’re a victim doesn’t mean you have to stay one.

Owen Laukkanen’s first novel, The Professionals, was nominated for the Anthony Award, the Barry Award, Spinetingler Magazine’s Best Novel: New Voices Award, and the International Thriller Writers’ Thriller Award for best first novel. He is a resident of Vancouver.

Praise for THE STOLEN ONES

“From start to finish, a fast-moving and satisfying thriller starring a likable if unlikely duo....The two agents have worked together before (Kill Fee, 2014, etc.), and if there's justice in the literary world, they will team up on many more cases.” —Kirkus Review

“Enthralling . . . Kill Fee works well as an in-depth police procedural and an insightful look at amorality and greed. Laukkanen employs the same strengths of brisk plotting and incisive character studies that he established in his first two novels.”—Associated Press

“Blistering pace and a stomach-turning homicide-for-hire scheme . . . Laukkanen keeps readers engaged with a serpentine plot that writhes through high-tech and low-life corruption.”—Publishers Weekly