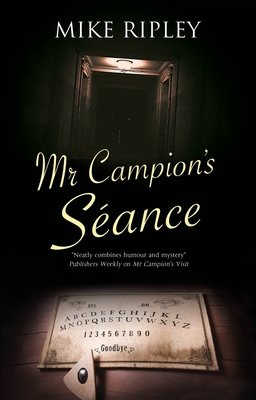 This is book number 7 in the Albert Campion Mystery series.

The truth is stranger than fiction for Albert Campion in this gripping mystery where murder, detective novels and the supernatural collide. 1946, London. The eagerly anticipated new detective novel from Albert Campion's godsibling, bestselling author Evadne Childe, is proving to be another runaway success. Unfortunately, it has also caught the attention of Superintendent Stanislaus Oates for reasons that go beyond its superior plotting. The crime at the heart of The Bottle Party Murder bears a number of striking similarities to a very real, recent and unsolved murder at the Grafton Club in Soho. Evadne wrote the book before the murder occurred, yet predicts it remarkably accurately - is it just a weird coincidence, is Evadne getting her information from 'the other side', or is something more sinister afoot? The repercussions of this extraordinary and complex case will reach out over the next fifteen years, drawing in three of Mr Campion's favourite policemen - Oates, Yeo and Luke - before finally coming to its violent conclusion in 1962.

Mike Ripley has twice won the Crime Writers' Association's Last Laugh Award, and is the author of twenty-four comedy thrillers and historical novels. He writes a hugely respected monthly review column for Shots Magazine entitled Getting Away With Murder and is also the author of Kiss Kiss Bang Bang, a 'reader's history' of the heyday of British action and spy thrillers, 1953-75, which won the H.R.F. Keating Award for non-fiction in 2017. With Mr Campion's Farewell (Severn House, 2014 and Black Thorn, 2019), he completed a manuscript left unfinished in 1969 by Margery Allingham's widower, Pip Youngman Carter. He regards the follow-ups including Mr Campion's War, Mr Campion's Visit and Mr Campion's S�ance as his attempts 'to fly solo with, and do justice to, a great fictional character'.