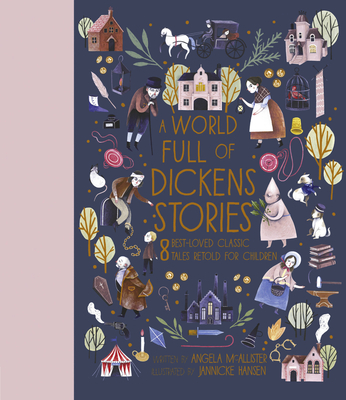 Uncover the stories from one of the greatest-novelists of all time in this beautiful anthology of tales from Charles Dickens, rewritten and adapted in an accessible way for children.

This book introduces children to eight of Dickens' greatest works, accompanied by beautiful, colourful illustrations which breathes new life into these timeless classics. Includes favourites such as Oliver Twist, A Christmas Carol, David Copperfield, and Great Expectations. A timeline at the back shows when each story was written, and gives facts about Dickens’ life.

Revisit your favourite Dickens stories and introduce his legacy to next generation of readers with this beautiful first introduction to some of the greatest stories all time.

Angela McAllister is the author of over 80 books for children and teens. Her books have won several awards, including the Red House Book Award for 'Yuck! That's Not a Monster!' and the Stockport and Portsmouth Awards for 'My Mum has X-Ray Vision'. Her picture book, 'Leon and the Place Between' has been adapted for the stage and was shortlisted for the Kate Greenaway Award. She has collaborated with many illustrators, including Grahame Baker-Smith, Alex T. Smith, Margaret Chamberlain, Ross Collins and Peter Bailey. She has worked on many titles for Frances Lincoln including bestselling titles A Year Full of Stories and A World Full of Animal Stories.

Jannicke Hansen is an illustrator who lives and works on the coast of Norway. She graduated from the Bergen Academy of Art and Design in 2016 and loves to experiment with different mediums. She loves folktales, books and coffee and lives happily surrounded by both!