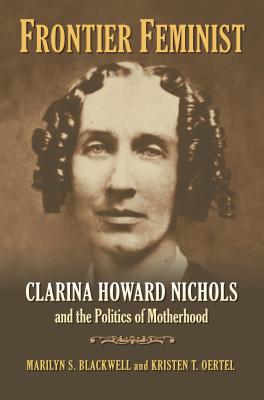 This is a masterfully researched biography of one of the pioneering mothers of the women's rights movement. Beginning with her birth in Townshend, VT, Nichols' biography spans the length of her life highlighting her advocacy for westward expansion and her work for social and political reform. Highly readable and endlessly fascinating. — Cheryl Cornwell

Clarina Howard Nichols was one of America's pioneering social reformers. From Vermont to Kansas to California, she forged a political role for women by using her stature as a lady and a mother to lobby vigorously for women's rights, antislavery, and temperance. After joining the antislavery migration to Kansas, Nichols championed freedom in the territory, assisted former slaves, and argued successfully for women's school suffrage before ending her career in California, where she continued to promote women's full enfranchisement. Despite her accomplishments and considerable respect from contemporaries such as Susan B. Anthony, she has been largely overlooked by historians. Marilyn S. Blackwell and Kristen T. Oertel remedy this oversight and examine Nichols's important role in women's rights, antislavery, and westward expansion. In their comprehensive portrait, Blackwell and Oertel uncover the fascinating story of a complex woman while providing a window on presuffrage political engagement and the creation of public womanhood in the nineteenth century. Their insightful narrative places Nichols in the context of American reform politics and western migration. It shows the effectiveness of Nichols's "politics of motherhood," examining her relationships with other female reformers and with male politicians. Nichols's story reveals the role Northern women played in "Bleeding Kansas" and how women's rights became entwined in the battle to rid the expanding nation of slavery. The authors cast Nichols as a deeply private person who guarded the secret of her divorce to protect both her political influence and her social position. By digging deeper than previous historians-into Nichols's few surviving letters, her columns as a journalist, and her speeches-they discover much about her failed first marriage and show how divorce gave her a unique insight into a legal system that disadvantaged many women. Nichols's personal struggles to overcome the stigma of her divorce and to settle in frontier Kansas form the dramatic backdrop to the development of her public career as a journalist and social reformer. Overcoming both personal hardships and political barriers, Clarina Howard Nichols left a trail of new rights for women across the nation. Frontier Feminist restores this crusading woman to her rightful place among the pantheon of reformers who sought full citizenship for women and freedom for black Americans.