My World Board Book: A Companion to Goodnight Moon (Board book) 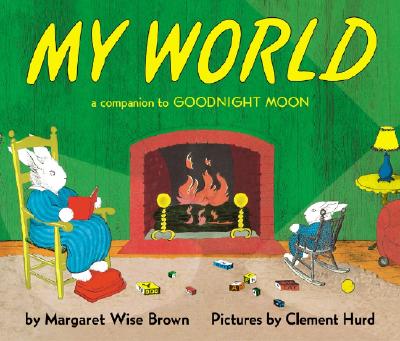 Now you can revisit the world of the beloved little bunny and family in this perfect companion to everyone's favorite bedtime story, Goodnight Moon.

Gentle illustrations of everyday objects along with poetic words capture the excitement of a young child exploring new boundaries, as the bunny greets all the familiar things in this new world.

From one of the most accomplished and popular author and illustrator collaborations of all time, this is a classic picture book in which good morning is as reassuring and enchanting as goodnight. The sturdy board book pages make this edition of the beloved story perfect for babies and toddlers.

Your world. My world. I can swing right over the world...

Clement Hurd (1908–1988) is best known for illustrating Goodnight Moon and The Runaway Bunny, the classic picture books by Margaret Wise Brown. He studied painting in Paris with Fernand Léger and others in the early 1930s. After his return to the United States in 1935, he began to work in children's books. He illustrated more than one hundred books, many of them with his wife, Edith Thacher Hurd, including the Johnny Lion books, The Day the Sun Danced, and The Merry Chase. A native of New York City, he lived most of his life in Vermont and California.