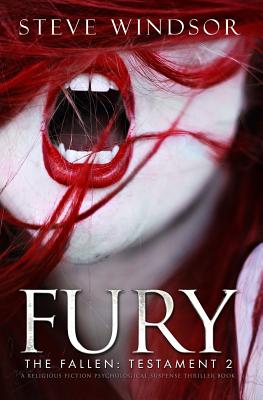 This is book number 2 in the Fallen series.

Do you love thriller books? "(FURY) spins you, slaps you across the face, and throws you off the roof . . . leaving you screaming for more."

Fury has a secret wish. She's willing to do just about anything to see it come true.

That includes risking a trip to the meanest, nastiest place that an archangel from Hell can find herself-the Garden of Eden-Life's Earth.

For an angel, the land of the Man-monkeys is no day at the beach. And Fury is finding out how true that is. It's hard to imagine that her soul could get any more lost than it all ready is, but she's got seven blasts of the trumpet left . . . before we'll all be lost with her.

Trapped in a resurrection dream turned redemption nightmare, any hope that Fury had for revenge against her father has gone fluttering off the roof with her fast and furious wings. The angry little angel is enduring things that make you wonder exactly why she would go to all the trouble.

But Fury wants something she shouldn't and she's willing to go from Hell to Heaven to get it. And for a dark archangel in the new Hell, that's saying something. But help is coming and not in the way she expected it. And with a little help from an old enemy and an even older ally, she might just make it back to Purgatory before the last trumpet blasts.

The second installment thriller in THE FALLEN series

FURY is a fast-paced, action-packed psychological thriller that asks the only question worth answering-what would you give up for love?

"An even better follow up to what promises to be an unforgettable series."

THE FALLEN series of books in order:

If you love an action-packed, wild and wicked thriller, get your copy of FURY now.