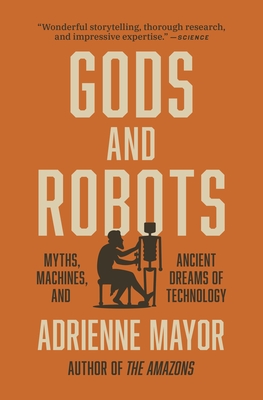 By Adrienne Mayor
$18.95
Click Title for IN STOCK Location

Beyond the finding of the Antikythera mechanism (an ancient astrolabe that archaeologist just found another piece of) Mayor examines everything from myths to ancient authors works both lost and referenced in other works of science and robotics. — Maeve Noonan

The first robot to walk the earth was a bronze giant called Talos. This wondrous machine was created not by MIT Robotics Lab, but by Hephaestus, the Greek god of invention. More than 2,500 years ago, Greek mythology was exploring ideas about creating artificial life--and grappling with still-unresolved ethical concerns about biotechne, life through craft. In this compelling, richly illustrated book, Adrienne Mayor tells the fascinating story of how ancient Greek, Roman, Indian, and Chinese myths envisioned artificial life, automata, self-moving devices, and human enhancements--and how these visions relate to and reflect the ancient invention of real animated machines. Revealing how science has always been driven by imagination, and how some of today's most advanced tech innovations were foreshadowed in ancient myth, Gods and Robots is a gripping new story of mythology for the age of AI.

Adrienne Mayor is the author of several books, including The Amazons: Lives and Legends of Warrior Women across the Ancient World and The Poison King: The Life and Legend of Mithradates, Rome's Deadliest Enemy, which was a finalist for the National Book Award (both Princeton). She is a research scholar in classics and the history of science at Stanford University.