Ten Hills Farm: The Forgotten History of Slavery in the North (Paperback) 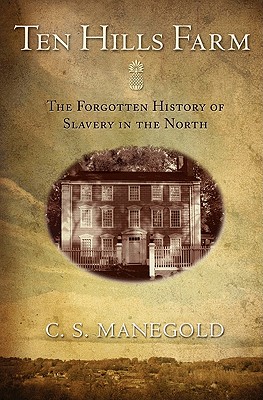 Ten Hills Farm tells the powerful saga of five generations of slave owners in colonial New England. Settled in 1630 by John Winthrop, governor of the Massachusetts Bay Colony, Ten Hills Farm, a six-hundred-acre estate just north of Boston, passed from the Winthrops to the Ushers, to the Royalls--all prominent dynasties tied to the Native American and Atlantic slave trades. In this mesmerizing narrative, C. S. Manegold exposes how the fortunes of these families--and the fate of Ten Hills Farm--were bound to America's most tragic and tainted legacy. Manegold follows the compelling tale from the early seventeenth to the early twenty-first century, from New England, through the South, to the sprawling slave plantations of the Caribbean. John Winthrop, famous for envisioning his city on the hill and lauded as a paragon of justice, owned slaves on that ground and passed the first law in North America condoning slavery. Each successive owner of Ten Hills Farm--from John Usher, who was born into money, to Isaac Royall, who began as a humble carpenter's son and made his fortune in Antigua--would depend upon slavery's profits until the 1780s, when Massachusetts abolished the practice. In time, the land became a city, its questionable past discreetly buried, until now. Challenging received ideas about America and the Atlantic world, Ten Hills Farm digs deep to bring the story of slavery in the North full circle--from concealment to recovery.

C. S. Manegold is the author of In Glory's Shadow: The Citadel, Shannon Faulkner, and a Changing America (Knopf). As a reporter with the New York Times, Newsweek, and the Philadelphia Inquirer, she received numerous national awards and was part of the New York Times team honored with a Pulitzer Prize in 1994.