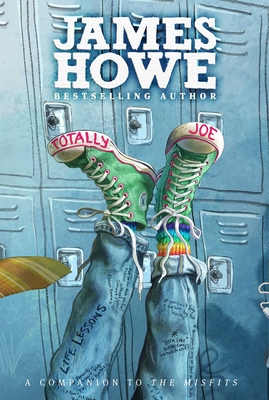 Joe Bunch breaks down his life—and his secrets—for a school assignment in this second book of the funny, heartfelt, and beloved Misfits series by Bunnicula author James Howe.

What can I say? I’m a total original.

Joe may only be twelve-going-on-thirteen, but he’s known who he is from the time he was a little kid tottering around in his mother’s high heels. Now in the seventh grade, he wears green high tops with pink trim, has a (secret) boyfriend, and tells it all from A to Z in the alphabiography assigned by his favorite teacher. The thing is, some of it is seriously private. It’s one thing for Mr. Daly to read it, but what if it falls into the wrong hands? Will he be teased forever about those high heels…and even worse, what will happen if his secret boyfriend is no longer a secret?

James Howe is the author of more than ninety books for young readers. Bunnicula, coauthored by his late wife Deborah and published in 1979, is considered a modern classic of children’s literature. The author has written six highly popular sequels, along with the spinoff series Tales from the House of Bunnicula and Bunnicula and Friends. Among his other books are picture books such as Horace and Morris but Mostly Dolores and beginning reader series that include the Pinky and Rex and Houndsley and Catina books. He has also written for older readers. The Misfits, published in 2001, inspired the nationwide antibullying initiative No Name-Calling Week, as well as three sequels, Totally Joe, Addie on the Inside, and Also Known as Elvis. A common theme in James Howe’s books from preschool through teens is the acceptance of difference and being true to oneself. Visit him online at JamesHowe.com.

*"The welcome return of the Gang of Five (though there are really only four) introduced in The Misfits. . . . This narrator is anything but an average Joe: he’s candid, memorable and—though he might find this hard to believe—totally charismatic.”
— Publishers Weekly, starred review

*"Howe has created a character that lives and breathes. . . . [There's] a sense of spending extra time with a favorite friend."
— Kirkus Reviews, starred review

"Joe's voice is both real and funny, ensuring accessibility to a wide range of students, male or female, gay or straight."
— School Library Journal