Walter Benjamin at the Dairy Queen: Reflections on Sixty and Beyond (Paperback) 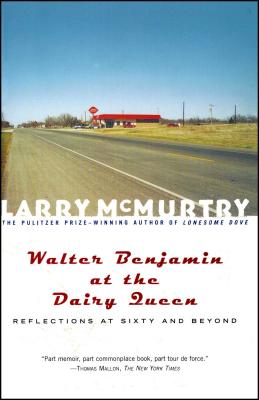 Besides having one of the truly great titles, this book is a compelling, hilarious, deeply considered personal essay about, among other things, storytelling, reading, bookselling, the frontier, and myth. One of the last writers to have had contact with first generation pioneers, McMurtry sets out to not “write autobiography but to describe the distance that separated [him] from the European writers” he spent his life reading. Along the way, he shares his childhood fear of chickens and of the old mute neighbor who had been sold as a girl for a winter’s catch of skunk hides. Written by a book lover for other book lovers, there are wonders on almost every page: the day he was drinking lime Pepsi reading the German essayist at the Dairy Queen was also the day of Archer County’s historical pageant directed by a man on the "lowest rung of thespianism"--dramatizing the history of little towns in historical pageants across the country. "His lot was hard." — Dafydd Wood

Part sociology and part memoir, this is really a love letter to books from a man who has devoted his adult life to every aspect of them. Most of the author's novels are remembrances of things past, when changing times loomed like dark thunderheads on the horizons of the people who lived on the vast open plains of the West and, like his own father, eked out hardscrabble lives from the unwelcoming land. The open book beckoned to McMurtry, not the open range, but his early life made an indelible mark on all that was to come and it is recalled with a fond nostalgia that is tinged with sadness. — Alden Graves

In a lucid, brilliant work of nonfiction, Larry McMurtry has written a family portrait that also serves as a larger portrait of Texas itself, as it was and as it has become.

Using an essay by the German literary critic Walter Benjamin that he first read in Archer City's Dairy Queen, McMurtry examines the small town way of life that big oil and big ranching have nearly destroyed. He praises the virtues of everything from a lime Dr. Pepper to the lost art of oral storytelling, and describes the brutal effect of the sheer vastness and emptiness of the Texas landscape on Texans, the decline of the cowboy, and the reality and the myth of the frontier.​

McMurtry writes frankly and with deep feeling about his own experiences as a writer, a parent, and a heart patient, and he deftly lays bare the raw material that helped shape his life's work: the creation of a vast, ambitious, fictional panorama of Texas in the past and the present. Throughout, McMurtry leaves his readers with constant reminders of his all-encompassing, boundless love of literature and books.

William Murchison The Washington Times The kind of long, deep wisdom found between these covers should occasion long, deep thought, suitable for the Dairy Queen or for that matter anywhere.