I Don't Want to Talk About It: Overcoming the Secret Legacy of Male Depression (Paperback) 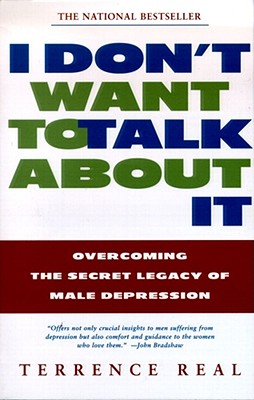 By Terrence Real
$18.00
Click Title for IN STOCK Location

It is okay for men to feel pain. This may sound seems like an easy concept to grasp, and maybe even somewhat of a hackneyed saying, but as Terrence Real recognizes in his I Don't Want to Talk About It, the idea has become hackneyed, just for how often it gets repeated, as if that through its repetition, the saying can become a cultural refrain, and that in its utterance, men are only excusing themselves for when they actually do feel anything resembling upset. Pain is weakness, many of us are too often reminded, and when it gets said enough times, we may actually live absent its hindrance.

A bestseller for over 20 years, I Don’t Want to Talk About It is a groundbreaking and hopeful guide to understanding and destigmatizing male depression, essential not only for men who may be suffering but for the people who love them.

Twenty years of experience treating men and their families has convinced psychotherapist Terrence Real that depression is a silent epidemic in men—that men hide their condition from family, friends, and themselves to avoid the stigma of depression’s “un-manliness.” Problems that we think of as typically male—difficulty with intimacy, workaholism, alcoholism, abusive behavior, and rage—are really attempts to escape depression. And these escape attempts only hurt the people men love and pass their condition on to their children.

This groundbreaking book is the “pathway out of darkness” that these men and their families seek. Real reveals how men can unearth their pain, heal themselves, restore relationships, and break the legacy of abuse. He mixes penetrating analysis with compelling tales of his patients and even his own experiences with depression as the son of a violent, depressed father and the father of two young sons.

Terrence Real is a psychotherapist in private practice. He has taught couples and family therapy, principally at the Family Institute of Cambridge, for twenty years. He lives with his wife and two sons in Newton, Massachusetts.

Richard Higgins The Boston Globe An important book about men and depression that is uplifting...Men will recognize the other men found here: laconic bullet-biters, 'rage-aholics,' emotional runaways, and badly fathered sons turned into disconnected dads who spill their emotional truths onto the page.

Pamela Warrick Los Angeles Times The most provocative in a flood of new books on depression...The only volume that speaks exclusively to and about depressed men.