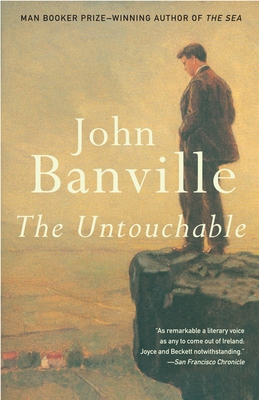 Banville's superlative, literate espionage novel is based on the infamous Cambridge spy ring. When the last member of the group, aged and ill, is finally identified, he begins an existential journal of discovery and self-discovery, asking why he spied and who betrayed him - and who he really is. — Louise Jones

One of the most dazzling and adventurous writers now working in English takes on the enigma of the Cambridge spies in a novel of exquisite menace, biting social comedy, and vertiginous moral complexity. The narrator is the elderly Victor Maskell, formerly of British intelligence, for many years art expert to the Queen. Now he has been unmasked as a Russian agent and subjected to a disgrace that is almost a kind of death. But at whose instigation?

As Maskell retraces his tortuous path from his recruitment at Cambridge to the airless upper regions of the establishment, we discover a figure of manifold doubleness: Irishman and Englishman; husband, father, and lover of men; betrayer and dupe. Beautifully written, filled with convincing fictional portraits of Maskell's co-conspirators, and vibrant with the mysteries of loyalty and identity, The Untouchable places John Banville in the select company of both Conrad and le Carre.

Winner of the Lannan Literary Award for Fiction

"Contemporary fiction gets no better than this... Banville's books teem with life and humor." - Patrick McGrath, The New York Times Book Review
"Victor Maskell is one of the great characters in recent fiction... The Untouchable is the best work of art in any medium on [its] subject." -Washington Post Book World
"As remarkable a literary voice as any to come out of Ireland; Joyce and Beckett notwithstanding." -San Francisco Chronicle

John Banville was born in Wexford, Ireland, in 1945.  He is the author of more than ten novels, including The Book of Evidence, which was shortlisted for the Booker Prize and won the Guinness Peat Aviation Award.  He won the Booker Prize for his novel The Sea in 2005.  He lives in Dublin.

"[Banville's] books are not only an illuminating read—for they are always packed with information and learning—but a joyful and durable source of aesthetic satisfaction." -The New York Review of Books

"Enthralling... Victor Maskell is a thinly disguised Anthony Blunt... Banville has pulled off a marvelous series of tricks." -Anita Brooker, The Spectator

"Banville has the skill, ambition and learning to stand at the end of the great tradition of modernist writers." -Times Literary Supplement

"It must by now be an open secret that on this [U.K.] side of the Atlantic, Banville is the most intelligent and stylish novelist at work." - George Steiner, The Observer

"An icy detailed portrait of a traitor, and a precise meditation on the nature of belief and betrayal... subtle, sad, and deeply moving work." - Kirkus Reviews

"Delectably droll and masterful... The rich fabric of this novel blends the shrewd humor of a comedy of manners with the suspense of a tale of espionage." - Booklist

"[Written with] grace and intelligence... His story is so well told that why he spied—and who betrayed him—become secondary." - Library Journal