Crossing the Threshold of Hope (Paperback) 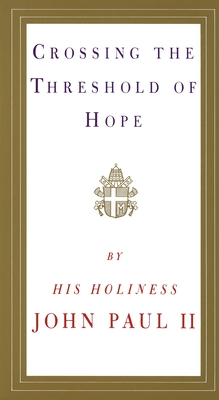 A great international bestseller, the book in which, on the eve of the millennium, Pope John Paul II brings to an accessible level the profoundest theological concerns of our lives. He goes to the heart of his personal beliefs and speaks with passion about the existence of God; about the dignity of man; about pain, suffering, and evil; about eternal life and the meaning of salvation; about hope; about the relationship of Christianity to other faits and that of Catholicism to other branches of the Christian faith.With the humility and generosity of spirit for which he is known, John Paul II speaks directly and forthrightly to all people. His message: Be not afraid!

POPE JOHN PAUL II (1920-2005), born Karol Jozef Wojtyla, was beatified on May 1, 2011. He reigned as Pope of the Roman Catholic Church from October 16, 1978 until his death on April 2, 2005, at the age of 84. He is widely regarded as one of the most influential figures of the 20th Century, and known for his humanitarian and peace-keeping efforts worldwide. His books include Crossing The Threshold of Hope, Love And Responsibility, and Gift and Mystery.