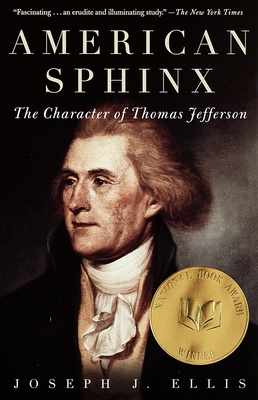 Only planning to read one book about our most elusive Founding Father? THIS IS THE ONE. A brilliant character study backed by meticulous scholarship, and the writing sparkles. Highest Recommendation

Following Thomas Jefferson from the drafting of the Declaration of Independence to his retirement in Monticello, Joseph J. Ellis unravels the contradictions of the Jeffersonian character.  He gives us the slaveholding libertarian who was capable of decrying mescegenation while maintaing an intimate relationship with his slave, Sally Hemmings; the enemy of government power who exercisdd it audaciously as president; the visionarty who remained curiously blind to the inconsistencies in his nature.  American Sphinx is a marvel of scholarship, a delight to read, and an essential gloss on the Jeffersonian legacy.

JOSEPH J. ELLIS is the author of many works of American history including Founding Brothers: The Revolutionary Generation, which was awarded the Pulitzer Prize; and American Sphinx: The Character of Thomas Jefferson, which won the National Book Award. He recently retired from his position as the Ford Foundation Professor of History at Mount Holyoke College and lives in Amherst, Massachusetts, with his wife and their youngest son.

“Fascinating … an erudite and illuminating study.” —The New York Times

“This elegant book on Jefferson sets a standard—history at its best.” —Chicago Tribune Editor’s Choice

“Magnificent.… Ellis has a Jeffersonian gift for language.” —Newsweek