The Embattled Vote in America: From the Founding to the Present (Paperback) 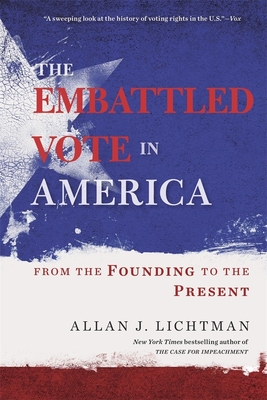 "A sweeping look at the history of voting rights in the U.S."--Vox

Who has the right to vote? And who benefits from exclusion?

For most of American history, the right to vote has been a privilege restricted by wealth, sex, race, and literacy. Economic qualifications were finally eliminated in the nineteenth century, but the ideal of a white man's republic persisted long after that. Women and racial minorities had to fight hard and creatively to secure their voice, but voter identification laws, registration requirements, and voter purges continue to prevent millions of American citizens from voting.

An award-winning historian and voting right activist, Allan Lichtman gives us the history behind today's headlines. He shows that political gerrymandering and outrageous attempts at voter suppression have been a fixture of American democracy--but so have efforts to fight back and ensure that every citizen's voice be heard.

"Lichtman uses history to contextualize the fix we're in today. Each party gropes for advantage by fiddling with the franchise... Growing outrage, he thinks, could ignite demands for change. With luck, this fine history might just help to fan the flame."
--New York Times Book Review

"The great value of Lichtman's book is the way it puts today's right-wing voter suppression efforts in their historical setting. He identifies the current push as the third crackdown on African-American voting rights in our history."
--Michael Tomasky, New York Review of Books