A Unit of Water, A Unit of Time: Joel White's Last Boat (Paperback) 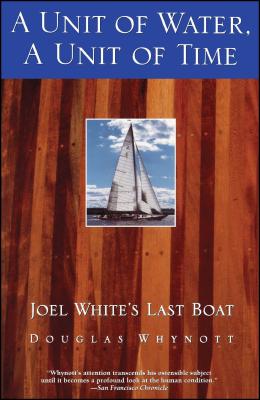 A poignant and inspiring story of sailboat designer Joel White's final year and his attempt to build his masterpiece. White was the son of E.B. White and Katherine White. — Bob Gray

In a time when racing boats are mass-produced from synthetic materials, a dying breed of craftsman continues to build wooden sailboats of astonishing beauty. Boatbuilding is an ancient art, and Joel White was a master. Son of the legendary writer E.B. White, he was raised around boats and his designs were as sublime and graceful as his father's prose. At a boatyard in Maine, White and his closely knit team of builders brought scores of his creations from blueprints into the ocean.
In June 1996, six months after being diagnosed with cancer, Joel White began designing the W-76, an exquisite racing yacht. It was his final masterpiece. Douglas Whynott spent a year at Brooklin Boat Yard, observing as this design took shape, first in sketches and then during the painstaking building of the wooden craft.
The result is the poignant tale of both a genius at work and the people devoted to his art. Evoking E.B. White's New England and its salty residents, A Unit of Water, a Unit of Time is a classic portrait of dignity, charm, and humble magnificence-and of a maritime community that keeps a vanishing world alive.

Douglas Whynott is the author of Following the Bloom and Giant Bluefin. He has worked as a piano tuner, apiary inspector, blues pianist, and dolphin trainer. His writing has appeared in Outside, the Boston Globe, Reader's Digest, and many other publications. He lives in New Hampshire.

San Francisco Chronicle Whynott's attention transcends his obstensible until it becomes a profound look at the human condition.

The New Yorker The book is cheerful in its portraits of men engaged in a work that satisfies in its difficulty, elegant details, and infallibly stirring results.

The San Diego Union-Tribune This discreet account of Joel White's final year is as spare and elegant as his vessels.

Boston Magazine This is a book about the value of work, about the beauty of craftsmanship, and about a group of people whose ritual days help keep a vanishing world alive.

Kirkus Reviews An affectionate, affirmative, yet lighter-than-air look at the life and work of Joel White.

Bill McKibben author of Maybe One A Unit of Water, a Unit of Time is as lovingly constructed as the boat it describes, and offers its readers the chance for a calm but vivid voyage.

Publisbers Weekly With understated grace, the author evokes a sense of maritime community as well as a fierce devotion to boats and a love of the sea, which emerges as an almost mystical form of communion with nature and the cosmos...E.B. White would have approved of this quietly profound book; it's a real beauty.

Tracy Kidder author of Home Town This is a charming and moving depiction of a contemporary genius at work, one who happens to be engaged in the ancient art of making boats. It is a necessary book for anyone afflicted with the passion for messing around with boats.

Library Journal Whynott skillfully weaves a story that speaks both of the love of his craft and the art of writing.