The Billion-Dollar Molecule: The Quest for the Perfect Drug (Paperback) 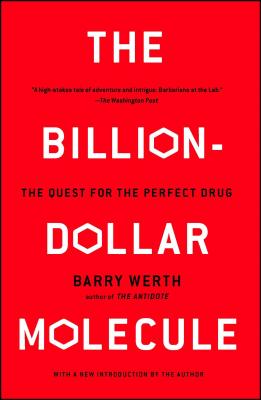 Join journalist Barry Werth as he pulls back the curtain on Vertex, a start-up pharmaceutical company, and witness firsthand the intense drama being played out in the pioneering and hugely profitable field of drug research.

Founded by Joshua Boger, a dynamic Harvard- and Merck-trained scientific whiz kid, Vertex is dedicated to designing—atom by atom—both a new life-saving immunosuppressant drug, and a drug to combat the virus that causes AIDS.

You will be hooked from start to finish, as you go from the labs, where obsessive, fiercely competitive scientists struggle for a breakthrough, to Wall Street, where the wheeling and dealing takes on a life of its own, as Boger courts investors and finally decides to take Vertex public. Here is a fascinating no-holds-barred account of the business of science, which includes an updated epilogue about the most recent developments in the quest for a drug to cure AIDS.

Barry Werth is an award-winning journalist and the acclaimed author of six books. His landmark first book, The Billion-Dollar Molecule, recounts the founding and early struggles of Vertex. Werth’s articles have appeared in The New Yorker, The New York Times Magazine, and GQ, among others. He has taught journalism and nonfiction writing at Smith, Mount Holyoke, and Boston University.

Geoffrey Smith Business Week A riveting tale that has more in common with a John Grisham thriller than with tomes on modern science.

John Schwartz The Washington Post The inside skinny...a high stakes tale of adventure and intrigue: Barbarians at the Lab. Werth's work is a gem.

John Travis The Boston Globe Fascinating...gripping...must reading for anyone curious about an industry that promises to revolutionize medical care in the next century.