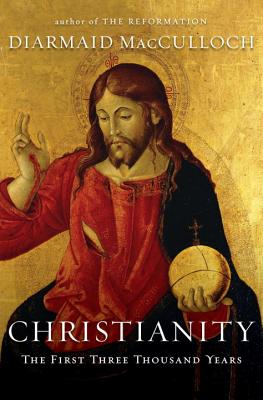 By Diarmaid MacCulloch
Call or email to see if a used copy is available.
Hard to Find - May no longer be available

Dazzling scholarship, elegant writing, and comprehensive scope establish this magisterial work as the likely standard against which all histories of Christianity will be measured for years to come. The history that Diarmaid MacCulloch has been preparing to write for decades. — Bill Lewis

The National Book Critics Circle Award-winning author of The Reformation returns with the definitive history of Christianity for our time Once in a generation a historian will redefine his field, producing a book that demands to be read-a product of electrifying scholarship conveyed with commanding skill. Diarmaid MacCulloch's Christianity is such a book. Breathtaking in ambition, it ranges back to the origins of the Hebrew Bible and covers the world, following the three main strands of the Christian faith. Christianity will teach modern readers things that have been lost in time about how Jesus' message spread and how the New Testament was formed. We follow the Christian story to all corners of the globe, filling in often neglected accounts of conversions and confrontations in Africa and Asia. And we discover the roots of the faith that galvanized America, charting the rise of the evangelical movement from its origins in Germany and England. This book encompasses all of intellectual history-we meet monks and crusaders, heretics and saints, slave traders and abolitionists, and discover Christianity's essential role in driving the enlightenment and the age of exploration, and shaping the course of World War I and World War II. We are living in a time of tremendous religious awareness, when both believers and non-believers are deeply engaged by questions of religion and tradition, seeking to understand the violence sometimes perpetrated in the name of God. The son of an Anglican clergyman, MacCulloch writes with deep feeling about faith. His last book, The Reformation, was chosen by dozens of publications as Best Book of the Year and won the National Book Critics Circle Award. This awe-inspiring follow-up is a landmark new history of the faith that continues to shape the world.

Diarmaid MacCulloch is a fellow of St. Cross College, Oxford, and professor of the history of the church at Oxford University. His books include Suffolk and the Tudors, winner of the Royal Historical Society's Whitfield Prize, and Thomas Cranmer: A Life, which won the Whitbread Biography Prize, the James Tait Black Prize, and the Duff Cooper Prize. A former Anglican deacon, he has presented many highly celebrated documentaries for television and radio, and was knighted in 2012 for his services to scholarship. He lives in Oxford, England.

"A landmark contribution ... It is difficult to imagine a more comprehensive and surprisingly accessible volume than MacCulloch's."
-Jon Meacham, The New York Times Book Review

"A well-informed and - bless the man - witty narrative guaranteed to please and at the same time displease every single reader, if hardly in identical measure.... The author's prose style is fluent, well-judged and wholly free of cant ... You will shut this large book with gratitude for a long and stimulating journey."
-The Washington Times

"A prodigious, thrilling, masterclass of a history book. MacCulloch is to be congratulated for his accessible handling of so much complex, difficult material ... He keeps the reader engaged with wit and choice anecdotes and throughout the entire book he retains his own distinctive, slightly irreverent perspective, and an unerring instinct for when to go from macro to micro history."
-John Cornwell, Financial Times

"He brings an insider's wit to tracing the fate of official Christianity in an age of doubt, and to addressing modern surges of zeal, from Mormons to Pentecostals."
-Economist

"A triumphantly executed achievement. This book is a landmark in its field, astonishing in its range, compulsively readable, full of insight even for the most jaded professional and of illumination for the interested general reader. It will have few, if any, rivals in the English language."
-Rowan Williams, Archbishop of Canterbury

"Christianity is a tour de force: it has enormous range, is gracefully and wittily written, and from page one holds the attention. Everyone who reads it will learn things they didn't know."
-Eamon Duffy, author of Saints and Sinners

"The great strength of the book is that it covers, in sufficient but not oppressive detail, huge areas of Christian history which are dealt with cursorily in traditional accounts of the subject and are unfamiliar to most English-speaking readers ... His analysis of why Christianity has taken root in Korea but made such a hash in India is perceptive and his account of the nineteenth-century missions in Africa and the Pacific is first-rate and full of insight."
-Paul Johnson, author of The Quest for God