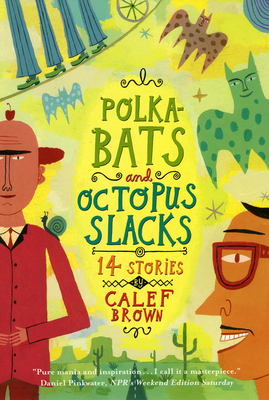 Fun, funny, colorful, irreverent and just plain silly: just a few words to describe Polka-Bats and Octopus Slacks. These hilarious stories will pick you up from the doldrums and drop you on a cloud of laughter. First-time author Brown has created a book so delightful, readers of all ages will rejoice in his fantastic mix of prose and illustration. — Jessica Wood

Georgie Spider catches flies but never eats the little guys. Instead he cooks them up in pies. He doesn't use the legs or eyes or any artificial dyes . . . Not far from a greenish town, the Bathtub Driver is selling cut-rate imported shampoo. Georgie Spider serves up award-winning pies, while overhead on Highwire 66 there's a small problem causing an acrobat traffic jam. Ed's funny smell, Eliza's special jacket - they're all part of the picture in Polkabats and Octopus Slacks, fourteen stories about pesky snails, sleeping fruit, and one funky snowman. In the tradition of Edward Lear, Calef Brown has fashioned fourteen nonsense poems so zany that both young and old will be unable to suppress their laughter. Brown's invented words and sounds and their visual counterparts create both an audible and a visual feast. This is the kind of silliness children relish.

Calef Brown began his career as a tour guide at an early age, when he discovered the simple joy of pointing things out. He is also an artist, writer, and frequently a blue elephant. Mr. Brown’s illustrations have appeared in many magazines and newspapers, and his paintings have been exhibited in N.Y., L.A., S.F., and other places without fancy initials, like Osaka and Rome. He lives in Maine.

“A wacky, postmodern array of characters. . . . Brown’s illustrations (are) a perfect choice of style for the poetry’s quirky logic. An exuberant debut, equally enjoyable read silently or aloud.” —Booklist Booklist, ALA