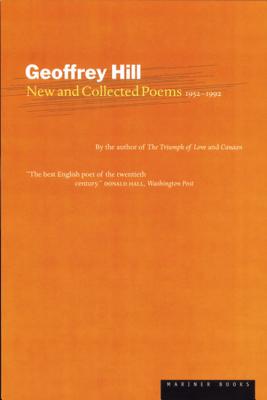 Hill is probably the best British poet after Philip Larkin. This volume collects everything you’ll need (he started taking Prozac in later life and his output quadrupled to the detriment of his ability). His work is thorny, violent, full of gnarled syntax and rhetorical power but lyrical and rewarding. “In Memory of Jane Fraser” and “Merlin” are two perfect poems that will be remembered. “Funeral Music,” a sequence of poems about historic British beheadings he described as “a florid, grim music broken by cries and shrieks.” Mercian Hymns, probably his most famous, is a curious collection of prose poems inspired by ancient British history which collapses time, the present bleeding into the past. Sometimes even funny.

This volume brings together poems from four decades of Geoffrey Hill's work.

Geoffrey Hill was born in 1932, in Bromsgrove, Worcestershire. He was the author of five books of poetry, two volumes of literary criticism, and a stage version of Isben's poetic drama Brand. He taught in the University Professors Program at Boston University.