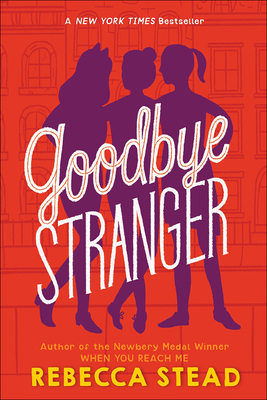 An extraordinary novel about middle school, love, and friendship. Set in New York City, Goodbye Stranger follows a group of seventh and ninth graders as they struggle to define love, fit in, and find their own voices at a new school. Relevant and full of humor and real drama; like Counting by 7s, this one will stick with you. Not to be missed for kids ages 10-14! — Aubrey Restifo

Masterly. . . . Sensitively explores togetherness, aloneness, betrayal and love. The New York Times Book Review
2016 Honor Book in Fiction, Boston Globe Horn Book Award
A NYT Editors' Choice and NYT Notable Children's Books of 2015
This brilliant novel by Newbery Medal winner Rebecca Stead explores multiple perspectives on the bonds and limits of friendship.
Bridge is an accident survivor who's wondering why she's still alive. Emily has new curves and an almost-boyfriend who wants a certain kind of picture. Tabitha sees through everybody's games or so she tells the world. The three girls are best friends with one rule: No fighting.Can it get them through seventh grade?
This year everything is different for Sherm Russo as he gets to know Bridge Barsamian. What does it mean to fall for a girl as a friend?
On Valentine's Day, an unnamed high school girl struggles with a betrayal. How long can she hide in plain sight?
Each memorable character navigates the challenges of love and change in this captivating novel.
Praise for Goodbye Stranger

This astonishingly profound novel is not your average middle-school friendship tale. The Horn Book, Starred
Stead shows how strongly love of all kinds can smooth the juddering path toward adulthood. Winsome, bighearted, and altogether rewarding. Booklist, Starred
Stead] captures the stomach-churning moments of a misstep or an unplanned betrayal and reworks these events with grace, humor, and polish into possibilities for kindness and redemption. Superb. Kirkus Reviews, Starred
This memorable story about female friendships, silly bets, different kinds of love, and bad decisions is authentic in detail and emotion. Publishers Weekly, Starred
Filled with humor and] delightful coincidences. . . . An immensely satisfying addition for Stead's many fans. School Library Journal, Starred
"The author as usual deftly interweaves her plot strands into an organic whole, and between the multifocal plot and the exploration on growth and self-recognition. . .deeply explores mistakes, and forgiveness, and growing away from people as well as toward them." The Bulletin, Starred
This eloquent story of friendship, first love, and identity will resonate powerfully with readers. VOYA, Perfect Ten
"Stead raises questions about whether a relationship can survive change. If someone makes a mistake, can you forgive the person, if not the act? Can two people reconcile, if they are both willing to process what happened? Or is the change more systemic--has one of you become a stranger? . . . It's a question all of the characters ask themselves at some point in Stead's perfectly synchronized novel." Shelf Awareness

Rebecca Stead is the author of three previous books for children.When You Reach Me, aNew York Timesbestseller, wonthe Newbery Medaland theBoston Globe Horn BookAward for Fiction.Liar & Spy, also a bestseller, was named a notable book by the New York Times Book Review andwon the Guardian Prize for Children s Fiction. Her first novel, First Light, was named a Best Book for Teens by the New York Public Library.Rebecca lives in New York City with her family. Visit her online at rebeccasteadbooks.com and on Twitter at @rebstead."