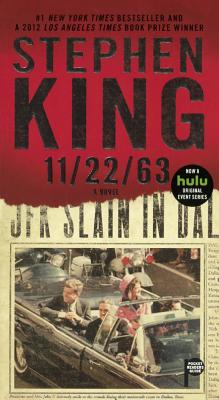 Jake Epping, a teacher in a small Maine community, is shown the portal for going back in time by a terminally ill man. Before the man dies, he convinces Jake to try and stop Lee Harvey Oswald from assassinating President Kennedy in Dallas. This is a Stephen King book, however, and there are unseen forces that do not want the past tampered with. 11/22/63 is compulsively readable, well-researched, and often exciting. Mr. King not only poses the question of what someone might do if he could stop a crime that altered history, he speculates on what America might have been like if Kennedy had escaped unharmed. — Alden Graves

Acclaimed author Stephen King's #1 bestselling time-travel novel soon to be a limited series on Hulu
In Stephen King's most ambitious and accomplished (NPR) and extraordinary ("USA TODAY") #1 "New York Times "bestselling novel, time travel has never been so believable. Or so terrifying.
Dallas, 11/22/63: Three shots ring out. President John F. Kennedy is dead.
Life can turn on a dime or stumble into the extraordinary, as it does for Jake Epping, a high school English teacher in a Maine town. While grading essays by his GED students, Jake reads a gruesome, enthralling piece penned by janitor Harry Dunning: fifty years ago, Harry somehow survived his father's sledgehammer slaughter of his entire family. Jake is blown away but an even more bizarre secret comes to light when Jake's friend Al, owner of the local diner, enlists Jake to take over the mission that has become his obsession to prevent the Kennedy assassination. How? By stepping through a portal in the diner's storeroom, and into the era of Ike and Elvis, of big American cars, sock hops, and cigarette smoke Finding himself in warmhearted Jodie, Texas, Jake begins a new life. But all turns in the road lead to a troubled loner named Lee Harvey Oswald. The course of history is about to be rewritten and become heart-stoppingly suspenseful.