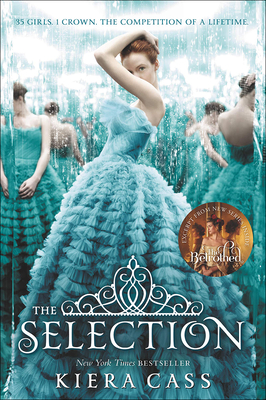 This is book number 1 in the Selection series.

Think The Bachelor meets The Hunger Games. Set in the future, a royal family rules what was once the United States of America and a caste system regulates society. The prince has come of age to find a wife and the “Selection” process begins. Enter: America Singer, a feisty, smart, and overall fantastic female role model who has been picked to participate in the Selection. A fun start to what was originally going to be a trilogy, to which Cass has decided to add two more books! — Misha D'Andrea

The Bachelor meets The Hunger Games in this Young Adult series. Set in the dystopian future America, now under the name "Illea", 35 young women must compete for the hand of the Prince. Coming from a rigid and unjust caste system, the Selected find that the competition isn't all romance and ball gowns as they face constant attacks from rebels while remaining under constant scrutiny of the public eye. A fun, fast-paced read for lovers of romance and dystopian YA.

“In this dystopian setting that overlays a futuristic society with the things we love about old-fashioned fairy tales, Cass weaves an intriguing story with the perfect balance of real-world problems and romance. America is a young, proud girl with a big heart and a bit of a temper from an impoverished family and social class,. She's a talented, self-respecting character who is great fun to follow in this fantastic Bachelor-type setting. I can't wait for the sequel!”
— Larissa Genschaw, Children's Bookshop, Kent, WA

For thirty-five girls, the Selection is the chance of a lifetime. The opportunity to escape the life laid out for them since birth. To be swept up in a world of glittering gowns and priceless jewels. To live in a palace and compete for the heart of gorgeous Prince Maxon.

But for America Singer, being Selected is a nightmare. It means turning her back on her secret love with Aspen, who is a caste below her. Leaving her home to enter a fierce competition for a crown she doesn't want. Living in a palace that is constantly threatened by violent rebel attacks.

Then America meets Prince Maxon. Gradually, she starts to question all the plans she's made for herself--and realizes that the life she's always dreamed of may not compare to a future she never imagined.