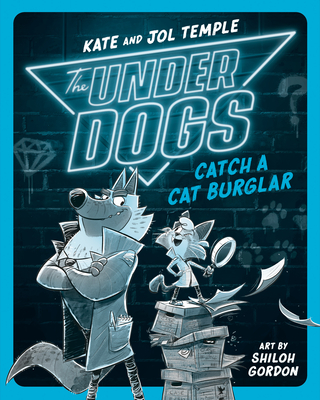 This is book number 1 in the The Underdogs series.

“The Underdogs will have young readers HOWLING with laughter, SNIFFING for clues, and BARKING with delight.” —Andrew McDonald and Ben Wood, creators of the Real Pigeons series

Perfect for fans of comical animal do-gooders like The Bad Guys, The InvestiGators, and The Chicken Squad, this hilarious chapter book series follows a group of bumbling dog detectives and their newest recruit—a cat! In this first case, the Underdogs are hot on the tail of a cat burglar.

Crime is on the rise in Dogtown, and it’s all thanks to a mysterious cat burglar! They’ve stolen everything from handbags to ham sandwiches, and nobody has been able to catch them. Now The Underdog Detective Agency is on the case . . . but as their name might suggest, they aren’t exactly the best sleuths in town.

Barkley and the other dogs at the agency have been in a bit of a slump, but this latest case could turn it all around. So to catch this menacing cat burglar, they may have to do the unthinkable and hire their first-ever cat detective. Enter Fang, a street-smart, one-eyed feline and the newest member of the team.

Being a cat in a dog’s world isn’t easy, but Fang is determined to prove she’s got what it takes. Will Fang and Barkley be able to work together to solve the case and help make Underdogs the top dogs once again? You’ll have to read to find out in this paws-itively hilarious mystery!

Kate and Jol Temple love to write silly books for kids! Some of them rhyme and others do not, but all of them have pictures because pictures are cool and anyone who says they're not is a two-headed yeti. Their books have won several awards such as the 2020 Charlotte Huck Award at NCTE. The Underdogs is their debut chapter book series. Kate and Jol live in Sydney, Australia, with their two sons and a dog that thinks it's a racoon. You can learn more about them all at katejoltemple.com and follow them @KateJolTemple on Instagram.


Shiloh Gordon has a passion for creating lively, engaging illustrations that are full of character and fun. He has a degree in animation from the Queensland College of Art and has worked as a professional illustrator for over twenty years. The Underdogs is his debut chapter book series. Shiloh lives in Brisbane, Australia, with his wife and three kids, who are an endless source of fun and inspiration. You can follow him on Instagram @ShilohIllustration.

Praise for the Underdogs!

"The Underdogs will have young readers HOWLING with laughter, SNIFFING for clues and BARKING with delight." —Andrew McDonald and Ben Wood, creators of Real Pigeons Fight Crime

"Nonstop wordplay and comic resilience prove winning in this quirky, quick-moving mystery, shown in Gordon’s animated b&w illustrations, that will have readers rooting for the Underdogs." —Publishers Weekly