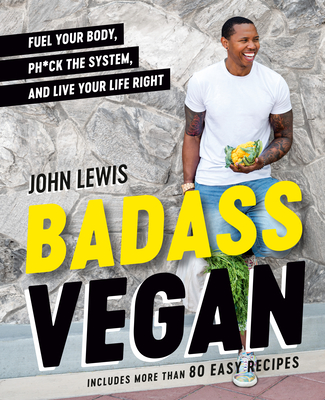 A “wake you up” manifesto and plant-based lifestyle plan to buck the system that keeps us fat, sick, and tired—from the Badass Vegan.

As John Lewis, aka “The Badass Vegan,” says, when most people meet him, vegan isn’t the first word that comes to mind. He’s six-foot-six, African American, with the build of a guy who played Division I college basketball. Not bad for someone who hasn’t had any animal protein in fifteen years.
Lewis became a plant-based eater when he saw how the conventional American diet was utterly failing his community. As he describes, heart disease, type 2 diabetes, high blood pressure, and chronic pain are killing Black people faster than any gun. The issue of food injustice is huge and complex, but as Lewis tells his strong community of followers, one solution is simple: Wake up now and do better in your own life. Want to give the middle finger to the processed food and pharmaceutical industries that are keeping you fat, sick, and tired? Go plant-based.
Badass Vegan offers an irreverent and eye-opening four-part master plan to help readers shift their mindset and enjoy the massive health benefits and pure pleasures of a plant-based lifestyle.  Lewis demystifies going vegan and makes it realistic—even if you’re intimidated by a whole avocado (Lewis once was, too)—with rock-solid advice on stocking a pantry, getting your nutrients, building strength, shedding excess weight, and ultimately creating sustainable change for a lifetime of health. Complete with 75 recipes for delicious food that’ll keep you motivated, from Jack U Up Street Tacos to Cucumber Watermelon Smoothies and Kimchi Nori Maki Rolls, Badass Vegan is a timely and profoundly needed manifesto for living a life with a lower risk for disease and making a positive impact on the world.

John Lewis, aka “The Badass Vegan,” is a health advocate and activist for the wellness of all living beings. After struggling with his weight as a kid and struggling with the violence that surrounded him in Ferguson, Missouri, Lewis played Division I basketball at Harris−Stowe State University, earned his MBA from Nova Southeastern University, and finally went plant-based in his twenties and created the Badass Vegan to help others do the same.