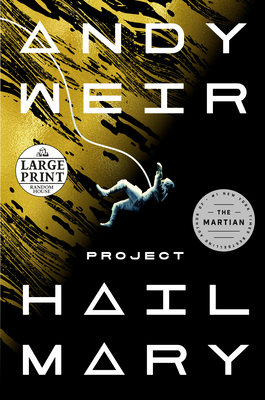 I absolutely loved Project Hail Mary the latest novel by Andy Weir, author of The Martian. Humanity is on the brink of a mass extinction and only one crew member remains on a long shot mission to save Earth. But Dr. Grace is not your typical astronaut; instead he is a junior high school science teacher who wakes on the ship to find he is the lone survivor of the crew with no memory of who he is or why he is there. As his memory returns he begins to understand the scope of the puzzle he must solve and he learns the importance of friendship.

“I couldn’t put it down.” People like to throw that phrase around. It’s hyperbole, usually, but not for Project Hail Mary, the latest science-barely-fiction from Andy Weir, author of The Martian. A lone astronaut wakes up on a ship light-years from Earth, with no memory of who he is, how he got there, or why humanity poured their collective resources into his journey. Thus begins a harrowing adventure through physics, biology, and human ingenuity, with the stakes higher than ever before---not to mention Weir’s trademark humor and unconquerable spirit. You won’t be able to put it down.

“Remember how much you loved The Martian? Prepare to love this book even more. I found myself engrossed from the very beginning, and every page brings a new delight. Weir writes incredible characters that leave a mark you’ll feel long after you’re done.”
— Mattie Shepard, Gramercy Books, Bexley, OH

#1 NEW YORK TIMES BESTSELLER • From the author of The Martian, a lone astronaut must save the earth from disaster in this “propulsive” (Entertainment Weekly), cinematic thriller full of suspense, humor, and fascinating science—in development as a major motion picture starring Ryan Gosling.

“If you loved The Martian, you’ll go crazy for Weir’s latest.”—The Washington Post

Ryland Grace is the sole survivor on a desperate, last-chance mission—and if he fails, humanity and the earth itself will perish.

Except that right now, he doesn’t know that. He can’t even remember his own name, let alone the nature of his assignment or how to complete it.

All he knows is that he’s been asleep for a very, very long time. And he’s just been awakened to find himself millions of miles from home, with nothing but two corpses for company.

His crewmates dead, his memories fuzzily returning, Ryland realizes that an impossible task now confronts him. Hurtling through space on this tiny ship, it’s up to him to puzzle out an impossible scientific mystery—and conquer an extinction-level threat to our species.

And with the clock ticking down and the nearest human being light-years away, he’s got to do it all alone.

An irresistible interstellar adventure as only Andy Weir could deliver, Project Hail Mary is a tale of discovery, speculation, and survival to rival The Martian—while taking us to places it never dreamed of going.

Andy Weir built a two-decade career as a software engineer until the success of his first published novel, The Martian, allowed him to live out his dream of writing full-time. He is a lifelong space nerd and a devoted hobbyist of such subjects as relativistic physics, orbital mechanics, and the history of manned spaceflight. He also mixes a mean cocktail. He lives in California.

“A crowd-pleaser on the grandest scale.”—The Boston Globe

“Weir spins a space yarn in a way only he can. Fans of his earlier works won’t be disappointed.”—Newsweek

“Andy Weir proves once again that he is a singular talent. Project Hail Mary is so fascinating and propulsive that it’s downright addictive. From the first page as Ryland wakes up not knowing who or where he is, I was hooked.”—Taylor Jenkins Reid, New York Times bestselling author of Daisy Jones & The Six

“Reading Project Hail Mary is like going on a field trip to outer space with the best science teacher you’ve ever had—and your class assignment is to save the world. This is one of the most original, compelling, and fun voyages I’ve ever taken.”—Ernest Cline, #1 New York Times bestselling author of Ready Player One

“Two worlds in peril, a competent (but flawed and human) man, a competent alien, unending scientific puzzles to unravel, with humanity itself at risk, this one has everything fans of old school SF (like me) love. If you like a lot of science in your science fiction, Andy Weir is the writer for you.”—George R. R. Martin, New York Times bestselling author of A Game of Thrones

“I loved The Martian, but I actually find Project Hail Mary to be Mr. Weir’s finest work to date. It’s somehow both exciting, yet also personal. I’m constantly amazed by how well Mr. Weir continues to write wonderfully accessible science fiction without compromising either the science or the fiction.”—Brandon Sanderson, New York Times bestselling author of the Stormlight Archive series

“Brilliantly funny and enjoyable . . . one of the most plausible science fiction books I’ve ever read.”—Tim Peake, ESA astronaut and internationally bestselling author of Limitless

“Thrilling doesn’t even begin to describe Project Hail Mary, which is undisputedly the best book I’ve read in a very, very long time . . . I cheered, I laughed (a lot), I cried, and when the twist arrived and the book revealed its true target, my jaw hit the floor. Mark my words: Project Hail Mary is destined to become a classic.”—Blake Crouch, New York Times bestselling author of Recursion and Dark Matter

“Readers may find themselves consuming this emotionally intense and thematically profound novel in one stay-up-all-night-until-your-eyes-bleed sitting. An unforgettable story of survival and the power of friendship—nothing short of a science fiction masterwork.”—Kirkus Reviews (starred review)