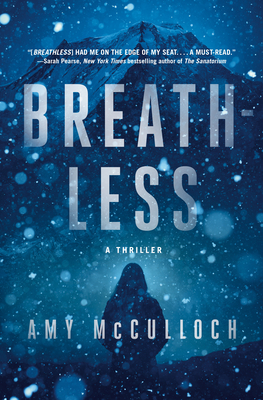 With the trek to the summit of Manaslu in Nepal, celebrated mountaineer Charles McVeigh will have ascended to all of the highest peaks on earth in a year's time. An eclectic group of world-class climbers gather to join him in the historic event. One of them intends to reveal the truth about a death during an earlier expedition. When he suffers a fatal fall, suspicions begin to arise that the dangers posed by the mountain might not be the most perilous aspect of the ascent. An edge-of-the-precipice thriller that deftly combines elements of an Agatha Christie whodunit with exhilarating Alistair MacLean adventure. — Alden Graves

AS SEEN ON THE TODAY SHOW • A high-altitude thriller that will take your breath away—Cecily Wong is on her most dangerous climb yet, miles above sea level. But the elements are nothing compared to one chilling truth: There's a killer on the mountain.

"A vertigo-inducing page-turner by an author who brings the high-stakes world of expert mountain-climbing to life on the page." —Nita Prose, #1 New York Times bestselling author of The Maid

Journalist Cecily Wong is in over her head. She’s come to Manaslu, the eighth-highest peak in the world, to interview internationally famous mountaineer Charles McVeigh on the last leg of a record-breaking series of summits. She’s given up everything for this story—her boyfriend, her life savings, the peace she’s made with her climbing failures in the past—but it’s a career-making opportunity. It could finally put her life back on track.

But when one climber dies in what everyone else assumes is a freak accident, she fears their expedition is in danger. And by the time a second climber dies, it’s too late to turn back. Stranded on a mountain in one of the most remote regions of the world, she’ll have to battle more than the elements in a harrowing fight for survival against a killer who is picking them off one by one.

AMY McCULLOCH is the author of Breathless, as well as eight novels for children and young adults, including the internationally bestselling YA novel The Magpie Society: One for Sorrow. In 2019, she became the youngest Canadian woman to climb Manaslu in Nepal. She lives in London.

"A vertigo-inducing page-turner by an author who brings the high-stakes world of expert mountain-climbing to life on the page."
—Nita Prose, #1 New York Times bestselling author of The Maid

“If you're looking for a book to thrill and transport you, then Breathless is the read for you! Set high in the chilling Death Zone, this thriller had me on the edge of my seat. I loved being immersed in the competitive, high-stakes world of alpine climbing, and Amy brilliantly evokes how risky this setting is, a setting that can only get deadlier with a murderer on the mountain . . . A must-read for 2022”
—Sarah Pearse, New York Times bestselling author of The Sanatorium

"Breathless is a high-altitude, high-stakes thriller that combines fascinating, authentic mountaineering experience with pure thriller entertainment. The suspense rises like the Nepalese mountain it is set on. Reminded me of the best of Michael Crichton, where in-depth knowledge and a masterful plot work together to create a tense adrenaline-fuelled ride. I loved it.’
—Matt Haig, #1 New York Times bestselling author of The Midnight Library

"This thriller would be unsettling enough at sea level, but in the death zone, it's suffocatingly tense. McCulloch combines extreme mountaineering with murder to create a novel that's chilling, vivid, and entirely unique."
—Abigail Dean, New York Times bestselling author of Girl A

"Tense, chilling and terrifying with unforgettable characters and an unpredictable and atmospheric plot. One of the most original thrillers I've read. It deserves to be huge!
—Claire Douglas, bestselling author of Last Seen Alive

"An intense and sinister thriller, Breathless takes readers on a treacherous climb to one of the highest peaks in the world. Amy McCulloch's chilling setting is remarkably evocative, and I was transfixed by her brave heroine grappling to reach the life-threatening summit, with a possible murderer on her trail. Mesmerizing and haunting, this enthralling suspense will make you shiver with dread and tear through the pages to the pulse-pounding end."
—Samantha M. Bailey, USA Today and #1 national bestselling author of Woman on the Edge

“I climbed Manaslu with Amy – she is the real deal.”
—Nirmal “Nimsdai” Purja, author of Beyond Possible and star of the Netflix documentary 14 Peaks