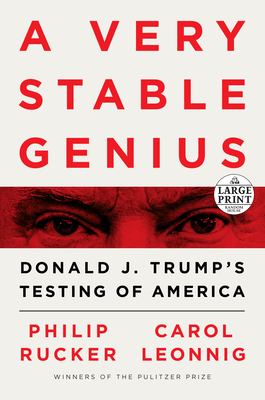 "I alone can fix it." So went Donald J. Trump's march to the presidency on July 21, 2016, when he accepted the Republican presidential nomination, promising to restore what he described as a fallen nation. Yet over the subsequent years, it has been hard to see beyond the daily chaos of scandal, investigation, and constant bluster. It would be all too easy to mistake Trump's first term for one of pure and uninhibited chaos, but there were patterns to his behavior and that of his associates. Leonnig and Rucker, with deep and unmatched sources throughout Washington, D.C., tell of rages and frenzies but also moments of courage and perseverance. Relying on scores of exclusive interviews with some of the most senior members of the Trump administration and other firsthand witnesses, the authors reveal the forty-fifth president up close. Here for the first time certain officials tell the truth for the benefit of history.

This peerless and gripping narrative reveals President Trump at his most unvarnished and exposes how decision making in his administration has been driven by a reflexive logic of self-preservation and self-aggrandizement - but a logic nonetheless. This is the story of how an unparalleled president has scrambled to survive and tested the strength of America's democracy and its common heart as a nation.

Philip Rucker is the senior Washington correspondent at The Washington Post and led its coverage of President Trump and his administration as White House Bureau chief. He and a team of Post reporters won the Pulitzer Prize and George Polk Award for their reporting on Russia’s interference in the 2016 presidential election. In 2021, the White House Correspondents’ Association honored Rucker with the Aldo Beckman Award for overall excellence in White House coverage. Rucker joined the Post in 2005 and previously has covered Congress, the Obama White House, and the 2012 and 2016 presidential campaigns. He serves as an on-air political analyst for NBC News and MSNBC and graduated from Yale University with a degree in history. He is also the co-author of I Alone Can Fix It: Donald J. Trump's Catastrophic Final Year.

Carol Leonnig is a national investigative reporter at The Washington Post, where she has worked since 2000, covering Donald Trump’s presidency and previous administrations. She won the 2015 Pulitzer Prize for her reporting on security failures and misconduct inside the Secret Service. She also was part of the Post teams awarded Pulitzers in 2018, for reporting on Russia’s interference in the 2016 presidential election, and in 2014, for revealing the U.S. government’s secret, broad surveillance of Americans. Leonnig is an on-air contributor to NBC News and MSNBC, author of Zero Fail: The Rise and Fall of the Secret Service, and co-author of I Alone Can Fix It: Donald J. Trump's Catastrophic Final Year.