Over on the Dry Side (Louis L'Amour's Lost Treasures): A Novel (CD-Audio) 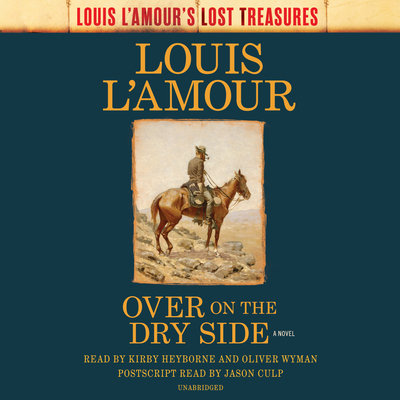 The abandoned cabin seemed like a good place to settle down . . . except for the dead man in the front yard. But Doby Kernohan and his father had traveled a long way seeking a new start, and they were in no position to be choosy. Unfortunately, the mysterious man’s violent end was an omen of darker events to come, for a cycle of violence that had begun long ago was about to reach an explosive conclusion. Caught in a tangle of murder, greed, and blood vengeance, the Kernohans have no choice but to get involved. And when a mysterious beauty from deep in the surrounding hills and a deadly stranger named Owen Chantry arrive, what had at first seemed like good fortune suddenly becomes a terrifying fight for life itself.

Louis L’Amour’s Lost Treasures is a project created to release some of the author’s more unconventional manuscripts from the family archives.

In Louis L’Amour’s Lost Treasures: Volumes 1, Beau L’Amour takes the reader on a guided tour through many of the finished and unfinished short stories, novels, and treatments that his father was never able to publish during his lifetime. L’Amour’s never-before-seen first novel, No Traveller Returns, faithfully completed for this program, is a voyage into danger and violence on the high seas. These exciting publications will be followed by Louis L’Amour’s Lost Treasures: Volume 2.

Additionally, many beloved classics will be rereleased with an exclusive Lost Treasures postscript featuring previously unpublished material, including outlines, plot notes, and alternate drafts. These postscripts tell the story behind the stories that millions of readers have come to know and cherish.