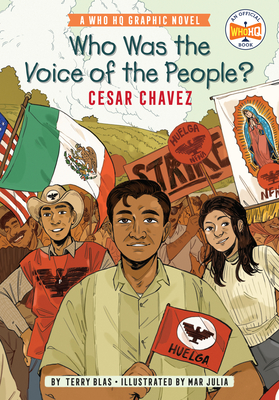 Discover the story behind Cesar Chavez and the Delano Grape Strike in this moving graphic novel -- written by award-winning author Terry Blas and illustrated by Ignatz-nominated cartoonist Mar Julia.

Follow Cesar Chavez and the National Farm Workers Association, as they set out on a difficult 300-mile protest march in support of farm workers' rights. A story of hope, solidarity, and perseverance, this graphic novel invites readers to immerse themselves in the life of the famous Latino American Civil Rights leader -- brought to life by gripping narrative and vivid full-color illustrations that jump off the page.

Terry Blas is the illustrator and writer behind the viral webcomics You Say Latino and You Say Latinx (Vox.com). He has written comics for Ariana Grande and the series Steven Universe, and Rick and Morty. His original graphic novels are Dead Weight: Murder at Camp Bloom (Oni Press), Hotel Dare (Kaboom!), and Lifetime Passes (Abrams/Surely Books 2021). He is the writer for the Marvel superhero series Reptil, as well as Who Was the Voice of the People?: Cesar Chavez (Penguin Workshop). He lives in Portland, Oregon, with his husband, Scott, and their dog, Alfie.

Mar Julia is an Ignatz award-nominated cartoonist and illustrator from Providence, Rhode Island. Their debut graphic novel Brownstone, a collaboration with writer Samuel Teer, is scheduled for release from Houghton Mifflin Harcourt's Versify imprint in 2022.

"Who Was the Voice of the People? focuses on Cesar Chavez’s march from Delano, California, to Sacramento to peacefully protest unfair wages and working conditions for grape-farm workers, also calling attention to Delores Huerta and Roberto Bustos...All the [Who HQ Graphic Novels] showcase the passions and urgency or risks behind their headline-making events and humanize the people who made them possible." -- Booklist