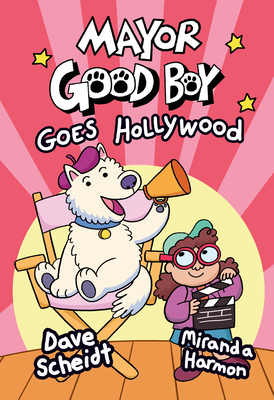 This is book number 2 in the Mayor Good Boy series.

The script is in . . . and Mayor Good Boy is going to the movies!

Mayor Good Boy is starring in his very own movie, set in his very own town, Greenwood. Too bad some crooks are out to steal the show! Don’t worry—interns Abby and Aaron are ready to help out. With items around town going missing and pizzas being stolen, will the mayor be able to save the day—and his movie—before it’s too late?

Dave Scheidt is a writer from Chicago. When he’s not writing comic books, he likes watching monster movies and eating snacks. He first started writing stories when he was ten years old and hasn’t stopped since.

Miranda Harmon is a cartoonist and story artist based in Los Angeles. She graduated from Goucher College and studied comics at the Sequential Artists Workshop. In spring 2019, she attended the Cartoon Network Studios Academy and then worked as a storyboard revisionist for The Fungies! at Cartoon Network. Her previously published comics include Spring Cakes (Holiday House, April 2021).

"As charming and spontaneous as the first installment." —Kirkus Reviews