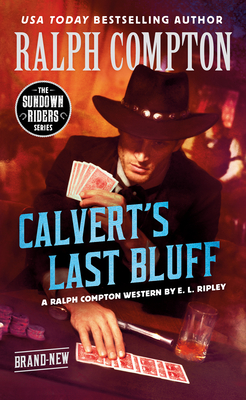 In this brand-new Ralph Compton Western, a hard-bitten gambler and a hard-luck kid begin a treacherous journey to new lives.

In Omaha, Tom Calvert boards a riverboat to play high-stakes poker, but accusations of cheating cause some serious trouble, and a deadly gun battle ensues.

Tom is injured and knows that his enemies will be looking for him, so he reluctantly accepts a bargain from young stowaway Asher. In exchange for Calvert teaching him gunslinging skills, Asher will guide them to a possibly mythical town of peace and plenty called Friendly Field. To get there they just have to battle assassins, dangerous Shoshone, and the rough wilderness of the Oregon Trail.

Ralph Compton stood six foot eight without his boots. He worked as a musician, a radio announcer, a songwriter, and a newspaper columnist. His first novel, The Goodnight Trail, was a finalist for the Western Writers of America Medicine Pipe Bearer Award for best debut novel. He was the USA Today bestselling author of the Trail of the Gunfighter series, the Border Empire series, the Sundown Riders series, and the Trail Drive series, among others.

E. L. Ripley has a background of military service and social work. He wrote his first novel when he was fifteen and has been writing ever since. His novels have been praised as "a fast-paced and engaging intrigue, with characters the reader will be attached to and root for despite their flaws and faults" (Marko Kloos, author of Chains of Command) and "a wild, page-turning ride" (Mike Shepherd, author of Kris Longknife: Unrelenting).