The Psychedelic History of Mormonism, Magic, and Drugs (Paperback) 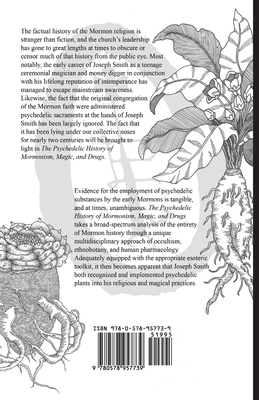 The factual history of the Mormon religion is stranger than fiction, and the church's leadership has gone to great lengths at times to obscure or censor much of that history from the public eye. Most notably, the early career of Joseph Smith as a teenage ceremonial magician and money digger in conjunction with his lifelong reputation of intemperance has managed to escape mainstream awareness. Likewise, the fact that the original congregation of the Mormon faith was administered psychedelic sacraments at the hands of Joseph Smith has been largely ignored. The fact that it has been lying under our collective noses for nearly two centuries will be brought to light in The Psychedelic History of Mormonism, Magic, and Drugs.

Evidence for the employment of psychedelic substances by the early Mormons is tangible, and at times, unambiguous. The Psychedelic History of Mormonism, Magic, and Drugs takes a broad-spectrum analysis of the entirety of Mormon history through a unique multidisciplinary approach of occultism, ethnobotany, and human pharmacology. Adequately equipped with the appropriate esoteric toolkit, it then becomes apparent that Joseph Smith both recognized and implemented psychedelic plants into his religious and magical practices.