Neither Here Nor There: Travels in Europe (Abridged / Audio Cassette, Abridged) 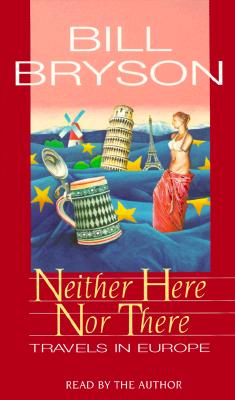 "Not long after I moved with my family to a small town in New Hampshire, I happened upon a path that vanished into a wood on the edge of town."

So begins Bill Bryson's hilarious book A Walk in the Woods.  Following his return to America after twenty years in Britain, Bryson decided to reacquaint himself with his native country by walking the 2,100-mile Appalachian Trail, which stretches from Springer Mountain in Georgia to Mount Katahdin in Maine.  The AT, as it's affectionately known to thousands of hikers, offers an astonishing landscape of silent forests and sparkling lakes--and to a writer with the comic genius of Bill Bryson, it also provides endless opportunities to test his own powers of ineptitude, and to witness the majestic silliness of his fellow human beings.

For a start, there's the gloriously out-of-shape Stephen Katz, a buddy from Iowa who accompanies the similarly unfit Bryson on the trail.  Once Bryson and Katz settle into their stride, it's not long before they come across the fabulously annoying Mary Ellen, whose disappearance ruins a perfectly good slice of pie, a gang of Ralph Lauren-attired yuppies from whom Katz appropriates a key piece of equipment, and a security guard in Pennsylvania who, for no ascertainable reason, impounds Bryson's car.  Mile by arduous mile these latter-day pioneers walk America, along the way surviving the threat of bear attacks, the loss of key provisions, and everything else this awe-inspiring country can throw at them.

But A Walk in the Woods is more than just a laugh-out-loud hike.  Bryson's acute eye is a wise witness to this fragile and beautiful trail, and as he tells its fascinating history, he makes a moving plea for the conservation of America's last great wilderness.  An adventure, a comedy, a lament, and a celebration, A Walk in the Woods is destined to become a modern classic of travel literature.

“Bryson is first and foremost a storyteller – and a supremely comic and original one at that.” – Winnipeg Free Press