Dear Malala, We Stand with You (Hardcover) 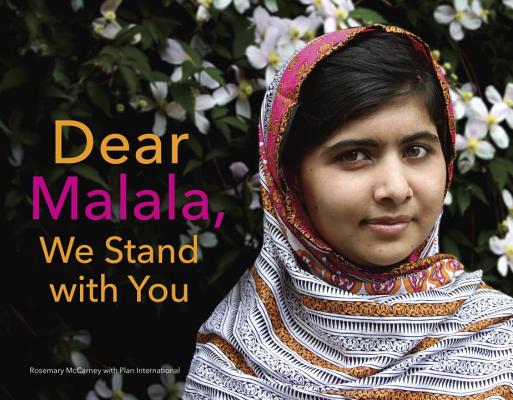 This is a perfect gift for kids of all ages, written to Malala Yousafzai, the recipient of the 2014 Nobel Peace Prize, in the form of an open letter. The message is simple, “Education is the only solution. Education first. — Whitney Kaaz

An inspiring letter to Malala Yousafzai, winner of the 2014 Nobel Peace Prize, that is both a show of support and a call to action for girls around the world.

Malala became the youngest person to win the Nobel Peace Prize after she survived being shot in the head by the Taliban for speaking out in favor of a girl's right to an education. She survived this brutal attack and has emerged as a very powerful voice for social justice in the world. Dear Malala, We Stand with You captures the impact Malala has had on girls from all walks of life. In powerfully simple language and stunning photographs, the struggles from poverty and violence faced by girls everywhere become a catalyst for change. The book includes an excerpt from Malala’s UN speech and provides readers with ways they can help and participate. Malala’s bravery has shown that one person and one voice is enough to change the world. As UN Secretary-General Ban Ki-moon said, the terrorists are most afraid of "the girl with a book."

Author Rosemary McCarney has over 20 years of international development work and runs the Canadian operations of Plan International as President and CEO.

Rosemary McCarney has over 20 years of international development work and runs the Canadian operations of Plan International as President and CEO. Her skills and passion play a pivotal role in Plan's Because I am a Girl Initiative, which advocates for girls’ rights everywhere.  Despite her unrelenting schedule that takes Rosemary all over the world, her three children and partner Barry remain the center of her personal universe.