Girl Rising: Changing the World One Girl at a Time (Paperback) 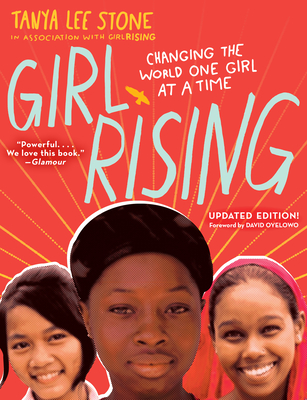 62 million girls are not in school. Tanya Lee Stone digs deep into gender inequality with personal and inspiring stories of girls persevering against remarkable odds to gain an education. A fantastic primer for girls wanting to make a difference in the world. — Martha Cornwell

"With delicacy and great empathy, Stone . . . prod[s] young readers to think of what better sort of girlhood is possible." —THE WASHINGTON POST

A gorgeous, full-color oversized book about educating girls across the world, inspired by the documentary that Entertainment Weekly says "every mother, sister, and daughter should see, as well as the men who love and support them."

Worldwide, more than 130 million girls are not in school.
Why is that, and what can you do about it?

Girl Rising started as a film, profiling nine unforgettable girls coming of age in the developing world and confronting the barriers to their education. Powered by these stories of resilience and determination, the film exploded into a global campaign for girls’ education.

This book—which can stand alone—is an expansion of that film. Author Tanya Lee Stone deftly integrates raw interview footage from the filmmakers with her own research to illuminate the facts and stories behind the girls in the film and more than twenty-five others around the world—girls who are conquering obstacles, becoming empowered, creating their own possibilities.

This updated edition features a foreword by David Oyelowo, the noted actor, producer, and activist for girls’ education. With stunning full-color photos from the global film shoots, recent statistics and information about the girls in the film, infographics, and a compelling narrative, Girl Rising is a call to action. It will inspire you to join an exhilarating and growing movement to change the world.

This is the right book for the present moment and perfect for anyone who believes that one girl with courage is a revolution.

Additional Praise for the Film:
"Delivers . . . tangible hope that the world can be healed in a better future." —MERYL STREEP

"Girl Rising stands as a testament to the power of information." —LOS ANGELES TIMES

Tanya Lee Stone has received many awards and honors for her books, including an NAACP Image Award for Courage Has No Color, a Robert F. Sibert Informational Book Medal for Almost Astronauts, and a Golden Kite Award for The Good, the Bad, and the Barbie. Her articles and reviews have appeared in School Library Journal, the Horn Book Magazine, and the New York Times. She is best known for her passion for telling little-known or unknown true stories of people who have been missing from our histories. Stone went to Oberlin College and now teaches writing at Champlain College. You can find her online at tanyastone.com, on facebook.com/tanyastone, and on Twitter at @TanyaLeeStone.

"A moving account of hardships and triumphs that is bound to inspire future activists, this is a devastating but crucial read. " —Kirkus, Starred review

"Much more than a companion volume to the 2013 semidocumentary of the same title... this vibrant book stands on its own as a source of inspiration." —Booklist, Starred review

"This book must not be missed as it will be an award-winner." —VOYA, Starred review

"A vivid, heartrending portrait of resilience in the face of tremendous obstacles; a closing section details ways readers can take action." —Publishers Weekly