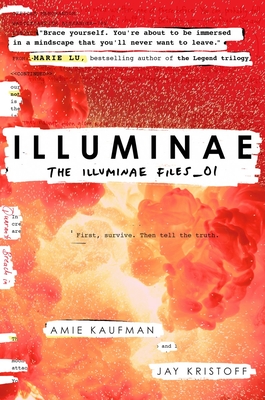 This is book number 1 in the The Illuminae Files series.

Told via a dossier of files documenting three major galactic events, this is the story of Kady and Ezra, teenage exes whose planet was destroyed, separating them onto two different rescue ships. Kady is a hacker on the science vessel Hypatia, trying to figure out what exactly is going on, and Ezra is a shuttle pilot on the battlecarrier Alexander. Equal parts love story, war story and thought-provoking opus on corporations and humanity, this book is an expansive and unforgettable thrill ride with characters you'll root for from start to finish. — Paige Mushaw

This is a novel unlike any other. It is the account of a crime of galactic importance, an account of genocide and corporate greed. BeiTech doesn't want you to read this. These documents are classified - but information wants to be free. Kady risked all to tell of this tragedy. After surviving her planet's destruction, she fled on a refugee fleet chased by a BeiTech battleship. One ship is destroyed, the reason so implausible Kady knows the brass is lying, and she begins digging for the truth, hacking military systems for information - incredible information: a deranged AI, and a bio-weapon plague, turning refugees violent...these documents are not for the timid. Read this, it will change you. — Leah Moore

For fans of Marie Lu comes the first book in an epic series that bends the sci-fi genre into a new dimension.

This morning, Kady thought breaking up with Ezra was the hardest thing she’d have to do. This afternoon, her planet was invaded.
The year is 2575, and two rival megacorporations are at war over a planet that’s little more than a speck at the edge of the universe. Now with enemy fire raining down on them, Kady and Ezra—who are barely even talking to each other—are forced to evacuate with a hostile warship in hot pursuit.
But their problems are just getting started. A plague has broken out and is mutating with terrifying results; the fleet’s AI may actually be their enemy; and nobody in charge will say what’s really going on. As Kady hacks into a web of data to find the truth, it’s clear the only person who can help her is the ex-boyfriend she swore she’d never speak to again.
Told through a fascinating dossier of hacked documents—including emails, maps, files, IMs, medical reports, interviews, and more—Illuminae is the first book in a heart-stopping trilogy about lives interrupted, the price of truth, and the courage of everyday heroes.

“Prepare yourselves for Illuminae.” —EW.com

“Brace yourself. You're about to be immersed in a mindscape that you'll never want to leave.”  —Marie Lu, bestselling author of the Legend trilogy

“This is one of those rare books that will truly keep your heart pounding.” —Beth Revis, bestselling author of Across the Universe

“This book is xxxxing awesome.”
—Laini Taylor, bestselling author of Daughter of Smoke and Bone

Amie Kaufman is the New York Times bestselling co-author of the Starbound series. Jay Kristoff is the award-winning author of the Lotus War series. Collectively, they are 12’5” tall and live in Melbourne, Australia, with two long-suffering spouses, two rescue dogs, and a plentiful supply of caffeine. They met, thanks to international taxation law, and stuck together due to a shared love of blowing things up and breaking hearts. You can learn more about Amie and Jay at amiekaufman.com and jaykristoff.com.