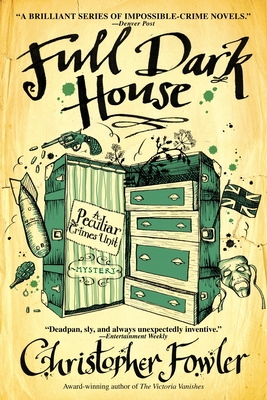 By Christopher Fowler
$17.00
In Stock

This is book number 1 in the Peculiar Crimes Unit series.

Edgy, suspenseful, and darkly comic, here is the first novel in a riveting mystery series starring two cranky but brilliant old detectives whose lifelong friendship was forged solving crimes for the London Police Department's Peculiar Crimes Unit. In Full Dark House, Christopher Fowler tells the story of both their first and last case—and how along the way the unlikely pair of crime fighters changed the face of detection.

A present-day bombing rips through London and claims the life of eighty-year-old detective Arthur Bryant. For his partner John May, it means the end of a partnership that lasted over half-a-century and an eerie echo back to the Blitz of World War II when they first met. Desperately searching for clues to the killer’s identity, May finds his old friend’s notes of their very first case and becomes convinced that the past has returned . . . with a killing vengeance.

It begins when a dancer in a risque new production of Orpheus in Hell is found without her feet. Suddenly, the young detectives are plunged in a bizarre gothic mystery that will push them to their limits—and beyond. For in a city shaken by war, a faceless killer is stalking London's theaters, creating his own kind of sinister drama. And it will take Arthur Bryant’s unorthodox techniques and John May’s dogged police work to catch a criminal whose ability to escape detection seems almost supernatural—a murderer who even decades later seems to have claimed the life of one of them . . . and is ready to claim the other.

Filled with startling twists, unforgettable characters, and a mystery that will keep you guessing, Full Dark House is a witty, heartbreaking, and all-too-human thriller about the hunt for an inhuman killer.

Christopher Fowler is the acclaimed author of the award-winning Full Dark House and nine other Peculiar Crimes Unit mysteries: The Water Room, Seventy-Seven Clocks, Ten Second Staircase, White Corridor, The Victoria Vanishes, Bryant & May on the Loose, Bryant & May off the Rails, The Memory of Blood, and The Invisible Code. He lives in London, where he is at work on his next Peculiar Crimes Unit novel.

"An absolutely riveting account of London during the Blitz."—Booklist

"Atmospheric, hugely beguiling and as filled with tricks and sleights of hand as a magician's sleeve...it is English gothic at its eccentric best; a combination of Ealing comedy and grand opera: witty, charismatic, occasionally touching and with a genuine power to thrill." —Joanne Harris, author of Chocolat

"The writing is as ever fluid and pacey, the characterization deft and the plot fresh and ingenious." —Independent on Sunday

"The intrigues of the theater murders, which decimate the cast, create considerable drama..... The dynamic between May and Bryant makes for compelling reading"—Publishers Weekly

“How many locked-room puzzles can the duo unlock before their Peculiar Crimes Unit is disbanded? Many more, one hopes.” —Kirkus Reviews
“A madcap mystery that’s completely crazy and great fun.” —Los Angeles Times