A Clash of Kings: A Song of Ice and Fire: Book Two (Hardcover) 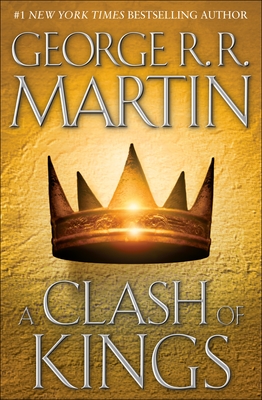 George R. R. Martin, a writer of unsurpassed vision, power, and imagination, has created a landmark of fantasy fiction. In his widely acclaimed A Game of Thrones, he introduced us to an extraordinary world of wonder, intrigue, and adventure. Now, in the eagerly awaited second volume in this epic saga, he once again proves himself a master myth-maker, setting a standard against which all other fantasy novels will be measured for years to come.

Time is out of joint. The summer of peace and plenty, ten years long, is drawing to a close, and the harsh, chill winter approaches like an angry beast. Two great leaders—Lord Eddard Stark and Robert Baratheon—who held sway over an age of enforced peace are dead . . . victims of royal treachery. Now, from the ancient citadel of Dragonstone to the forbidding shores of Winterfell, chaos reigns, as pretenders to the Iron Throne of the Seven Kingdoms prepare to stake their claims through tempest, turmoil, and war.

As a prophecy of doom cuts across the sky—a comet the color of blood and flame—six factions struggle for control of a divided land. Eddard’s son Robb has declared himself King in the North. In the south, Joffrey, the heir apparent, rules in name only, victim of the scheming courtiers who teem over King’s Landing. Robert’s two brothers each seek their own dominion, while a disfavored house turns once more to conquest. And a continent away, an exiled queen, the Mother of Dragons, risks everything to lead her precious brood across a hard hot desert to win back the crown that is rightfully hers.

A Clash of Kings transports us into a magnificent, forgotten land of revelry and revenge, wizardry and warfare. It is a tale in which maidens cavort with madmen, brother plots against brother, and the dead rise to walk in the night. Here a princess masquerades as an orphan boy; a knight of the mind prepares a poison for a treacherous sorceress; and wild men descend from the Mountains of the Moon to ravage the countryside.

Against a backdrop of incest and fratricide, alchemy and murder, the price of glory may be measured in blood. And the spoils of victory may just go to the men and women possessed of the coldest steel . . . and the coldest hearts. For when rulers clash, all of the land feels the tremors.

Audacious, inventive, brilliantly imagined, A Clash of Kings is a novel of dazzling beauty and boundless enchantment—a tale of pure excitement you will never forget.

"The second novel of Martin's titanic Ice and Fire Saga [is]...a truly epic fantasy set in a world bedecked with 8000 years of history, beset by an imminent winter that will last ten years and bedazzled by swords and spells wielded to devastating effect....Here, he provides a banquet for fantasy lovers with large appetites."—Publishers Weekly, starred review