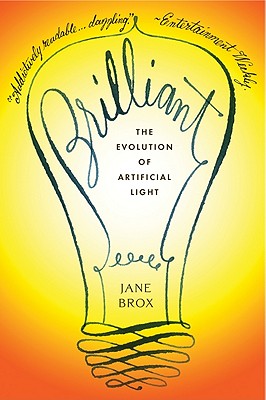 Brilliant begins with the very first known human-made lamp in the Lascaux Caves and travels all the way to present day with the debate between LEDs and CFLs. The most fascinating part is seeing how advances in lighting and electricity have shaped the culture of man-kind from the start. — Krysta Piccoli

“These days we take the artificial illumination of our world so much for granted that it is surprising to learn that much of our country was not electrified until well into the last century. Brox looks at the entire history of illumination from the Ice Age forward, explaining not only the development of different lighting technologies through history, but helping us understand what each meant to the people whose lives they so profoundly changed.”
— Dale Szczeblowski, Porter Square Books, Cambridge, MA

Brilliant, reminiscent of Lewis Hyde’s The Gift in its reach and of Timothy Egan’s The Worst Hard Time in its haunting evocation of human lives, offers a sweeping view of a surprisingly revealing aspect of human history—from the stone lamps of the Pleistocene to the LEDs embedded in fabrics of the future.
Brox plumbs the class implications of light—who had it, who didn’t—through the many centuries when crude lamps and tallow candles constricted waking hours. She convincingly portrays the hell-bent pursuit of whale oil as the first time the human desire for light thrust us toward an environmental tipping point. Only decades later, gas street lights opened up the evening hours to leisure, which changed the ways we live and sleep and the world’s ecosystems.
Edison’s “tiny strip of paper that a breath would blow away” produced a light that seemed to its users all but divorced from human effort or cost. And yet, as Brox’s informative and hair-raising portrait of our current grid system shows, the cost is ever with us.
Brilliant is infused with human voices, startling insights, and—only a few years before it becomes illegal to sell most incandescent light bulbs in the United States—timely questions about how our future lives will be shaped by light.

JANE BROX is the author of Brilliant, Clearing Land, Five Thousand Days Like This One, a finalist for the National Book Critics Circle Award, and Here and Nowhere Else, which received the L. L. Winship/PEN New England Award. She lives in Maine.

"Just one of the many pleasures of Jane Brox's sweeping history of human light is its evocation of the wonder and fascination the lowly light bulb roused when it was new, before it became, by virtue of the reverse alchemy of mass production, abundant and déclassé.  Brox succeeds brilliantly thanks to writing that rivals her subject in sparkle, glow, and wattage."
--Sylvia Nasar, author of A Beautiful Mind
“I'll gladly read anything by Jane Brox on any subject, but her poetic and original retelling of the story of manmade light provides a suitably grand occasion for her superb powers of observation and her intimate, precise, startlingly evocative prose to shine.”
--Carlo Rotella, author of Cut Time
"In gracious, elegant, unhurried prose, Jane Brox unspools the story of light. Every page contains at least one small marvel, but the greatest wonder is the realization that what she has illuminated is nothing less than a story of ourselves, and of the myriad ways our lives are 'interconnected, contingent, and intricate.' BRILLIANT, indeed."-
--Leah Hager Cohen , athor of Train Go Sorry and House Lights

"Brilliant is fascinating in its subject matter, charming in its storytelling and accessible style, and meticulously researched.  This kind of book helps place science in a human context."
--Alan Lightman, author of Einstein's Dreams